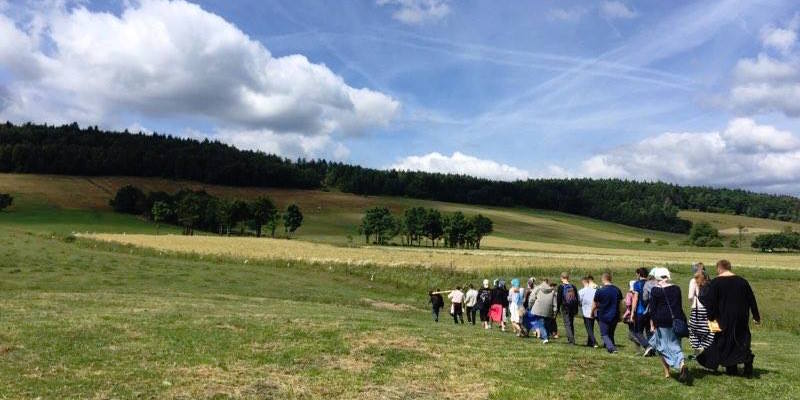 From 10-12 July 2016, an Orthodox pilgrimage to the Holy Mount Javor took place. The participants left on Sunday (10.07) from Konieczna/Konechna, where, at the local Saint Basil church, Divine Liturgy had been celebrated, and where they had been hosted by the locals with breakfast. The Divine Liturgy was celebrated by the leader of the Przemyśl-Nowy Sącz Eparchy Fellowship of Orthodox Youth – Rev. Andrzej Grycz, as well as the priest of Gładyszów/Gladyshiv, Regietów/Regetiv, Zdynia/Zhdynia and Konieczna/Konechna parishes – Rev. Arkadiusz Barańczuk. In the sermon, the priests pointed out the need for pilgrimages, mentioning the long-lasting tradition of pilgrimages to the Holy Mount Javor, even those from before 1947, and then after Lemkos’ return to their mother land. Further, Rev. Barańczuk remarked that pilgrimages have started to resemble bus trips, contrary to what it was like before – pilgrimages to Holy Places on foot. Although the pilgrimage was directed mainly towards the youth, the priests invited the faithful to join their children every year, as well.

On the way from Konieczna/Konechna to Regetów/Regetiv, the pilgrims stopped for a while at the cemetery from the First World War. The pilgrims sang Eternal Memory to the Austrian and Russian soldiers who rest there. Further, walking through forest roads, they reached Regetów Wyżny/Regetiv Vyzhnij, (a ghost village), and then they attended a Moleben (service of intercession) at Saint Michael Church in Regetów/Regetiv (formerly Lower/Nyzhnij). After the brief service, everybody was invited to lunch at one of the local families.

On the second day of the pilgrimage, the youth together with Rev. Marek Gotsko from Komańcza/ Komancha village, went to the neighboring village, Ripky, to clean up the local cemetery. Although the village still exists, the church that used to be there, now belongs to the Country Building Museum in Sanok. The local faithful and the cemetery belong to the Orthodox parish in Hańczowa/Hanchova. After the cemetery clean up, a memorial service was served in the place where the church mentioned (Church of Nativity of the Blessed Virgin Mary from 1801) was located. At 5 PM in the Hańczowa/Hanchova church, vespers began, celebrated by the Archbishop Paisjusz of Gorlice, with the participation of many priests and the faithful. After that, the youth were hosted by one of the local families where a barbecue took place.

On the very day of hte Feast of Saints Peter and Paul, at 7 a.m. the pilgrims took part in a Moleben in Hańczowa/Hanchova, then they went to Wysowa/Vysova on foot. After they greeted Archbishop Paisjusz there, they went further to the Holy Mount. After the celebration of the Divine Liturgy, a cross which had been carried by the pilgrims throughout the whole pilgrimage, was blessed.