As the website of the Wrocław-Gdańsk Eparchy of the Ukrainian Greek Catholic Church announces, within the Polish nationwide decommunization of names that promote or commemorate totalitarian regimes, in Biały Bór, the north of Poland, on 5th December 2016, social consultations regarding changing the names of the Red Army Street (Armii Czerwonej) and Michała Roli-Żymierskiego street started. One of the suggestions  for substitution of the Żymierski street is the name of an eminent Lemko artist, philosopher and theologist – Jerzy Nowosielski. The consultations will last until 3rd February of the following year.

Social consultations regarding suggestions of the changes of some topographic names consist of two stages. In the first one – inhabitants of Biały Bór commune may vote, submitting an application. When some of the names gets a minimum amout of voices, the second stage comes – passing the change of the street’s name for a new one by members of the city council.

The appeal that has been made by the parish priest in Biały Bór – priest Stefan Batruch – is directed only towards the inhabitants of Biały Bór commune because only them have the legitimation for social consultations. They may submit their suggestion on paper or electronically. In the first case, a suggestion shall be sent to the city hall, the electronic one should be sent to: gmina@bialybor.com.pl.

In order to support promotion of the suggestion to change the name of Żymierskiego street for Nowosielskiego street, together with the application it would be good to attach explanation for the reason why Jerzy Nowosielski should become the street’s patron. When it comes to Biały Bór inhabitants, where a church of Birth of the Mother of God built in 1992-1997 is located, the crucial thing is that Nowosielski designed the church, mostly he is the author of the iconostasis. In the justification to the project we can read also about numerous Nowosielski’s achievements, both in the scientific and artistic field. Details, mostly when it comes to inhabitants of Biały Bór, are available here. 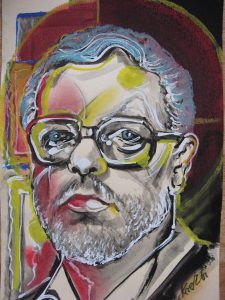 Jerzy Nowosielski was born on 7 January 1923 in Kraków, in the family of Lemko origins that moved to the city because of job, earlier they had lived in Odrzechowa village near Sanok. He studied art and it took him a long time. He started at the time of the German occupation in 1940, then from 1945 he continued and finished only in 1961. He was a professor at the Kraków Academy of Fine Arts. He painted nudes, still life, landscapes, but mostly he is known for religious compositions. In the 1950s he painted compositions in numerous Catholic and Orthodox churches. He was gradually leaving the secular themes and started to deal with sacred art only. He became famous as an eminent Christian theologist and philosopher. Nowosielski got the title of doctor honoris causa of the Jagiellonian University in Kraków, he was awarded and honoured  many times.

He would always emphasize his Lemko background. He appreciated Rusyns and he used to say openly that although they had been living as neighbours for the western nations for ages, they have never lost their qualities. He used to say that because of this, he was not afraid of Lemkos’ assimilation. He passed away on 21 February 2011 in Kraków, he was buried at the Rakowicki Cemetery. 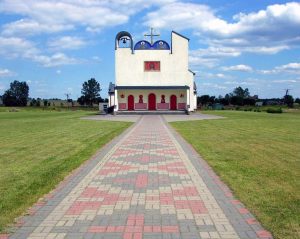 In our LEM.fm podcasts there is a precious recording from the archive of prof. Olena Duć-Fajfer, recorded on Nowosielski’s 70th birth anniversary in 1993. Based on this interview, an article was published in the Lemko Calendar 1993 (for the 70th birthday of Nowosielski). The topics raised may help in getting to know Nowosielski’s attitude towards his Lemko background and Lemkovyna. You can listen to the record here.