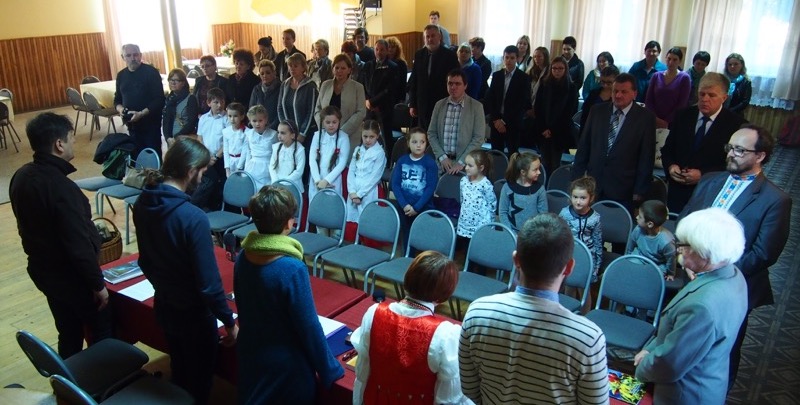 For two days, the XXIV Lemko Cultural Autumn started on Saturday, 15 October 2016, from visiting Greek Catholic St. Michael church in Krasna (Korostenka). This year’s edition was dedicated to Klavdiya Aleksovich – the First Lemko Lady, a poetess, publicist and activist for women’s emancipation. For the first time in the last twenty four years, the birth or death anniversary of a person to whom Lemko Cultural Autumn was dedicated, overlapped with it. Klavdiya Aleksovich died on 15 October 1916. She was from Krosno Rus’, a village where also our Teacher – Ivan Rusenko – was from.

Inside the church, which nowadays functions as a Catholic church, Eternal Memory was sang for Klavdiya Aleksovich. Then, homilies were given, among others by the current Catholic parish priest from Krasna. He expressed his gratitude for having the opportunity to encounter both Aleksovich and the Lemko people. After that, the participants went to a nearby firehouse where the XXIV Lemko Cultural Autumn officially started. At the beginning, Petro Trochanovsky asked for a minute’s silence for a Rusyn poet and political activist who died in July this year – Gabriel Hattinger-Klebashko. Then, after the guests have been welcomed by the organizers, this year’s artists, who accepted their invitations, were presented to the audience. The artists were: a singer from Ukraine – Lesia Mackiv-Horlytska, Bogdan Gambal who read the prose, poets: Peter Medvid, Olena Duć-Fajfer, Petro Murianka, as well as a guest from Wilamowice, a representative of Vilamovian language, poet and teacher – Tiöma Fum Dökter – who willingly presented his roots, tragic history, as well as the current situation of Vilamovian people and their language. Olena Duć-Fajfer, Ph.D. gave a brief speech concerning the person of Klavdiya Aleksovich.

Later on, all of the artists presented their works in Rusyn and Vilamovian languages, as well as the translations into Polish, taking into consideration the fact that the event was attended by the current Krasna inhabitants and primary school students. At the end of the first day of the XXIV Lemko Cultural Autumn, students from Krasna, as well as Lesia Mackiv-Horlytska performed, the last one with her authorial and other songs. Also, Petro Murianka, dressed in the traditional Lemko “chuha”, performed songs he had written on stage.

The second day of the event (Sunday, 16.10), according to tradition, was similar to the first one, although, as always, it took place at the Ruska Bursa in Gorlice. The meeting with Lemko poetry started at 3PM with a visit to the Rusenko Remembrance Hall located on the first floor of the Bursa building. Further, much like in Korostenka, artists presented their works, sitting in the central place – by the author’s table. The day and, at the same time, the whole event, ended with a performance of Dollars Brothers ensemble from Gorlice. They presented, among others, music with lyrics written by Ivan Rusenko, Petro Murianka and others.

Below is a comprehensive photoreport covering the two days of the event, by Petro Basałyga (Krasna) and Bogdan Gambal (Gorlice).