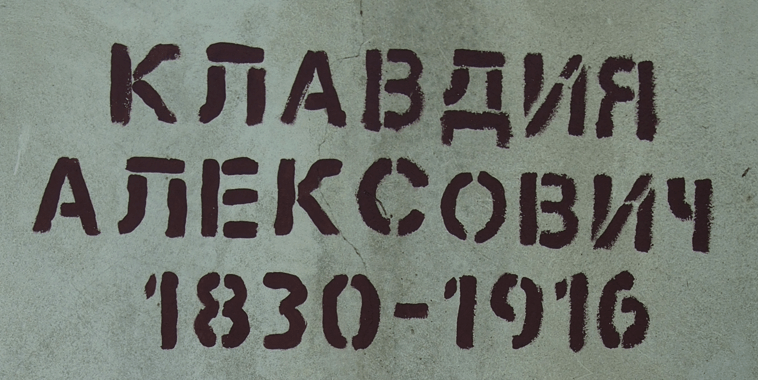 On 15 October 2016, it was the 100th anniversary of the death of Klavdiya Aleksovich – the First Lady of the Lemko literature. She was born on 20 November 1830, as a priest’s daughter. Her father was a Greek Catholic priest in Krasna village (Korostenka), located in the Krosno Rus’ (Krosno County), called also the region of Zamishancy/замішанці (literally: the mixed ones), i.e. Rusyns who used to live in the Pogórze/Погіря area, north of Krosno. Klavdiya’s mother, Teresa, was a daughter of priest A. Trochanovsky, who was the parish priest in Grab/Граб/Hrab. Klavdiya became an orphan as a child and a Rusyn bishop handled her upbringing and education. His name was Toma Polyanskyi and he was an Archbishop of Przemyśl (his roots were from Bortne, Lemkovyna). He was her uncle.

Klavdiya Aleksovich is often named as the First Lemko Lady and it is not without reason. She was the first Lemko lady to manifest her education and she led to the emancipation of Rusyn women .

Taking into consideration the times when she lived, it was a success. The 19th and the beginning of the 20th century is the time when women only started to show their presence in the public and social environment. It was thanks to Archbishop Polyanskyi’s support that the young girl could develop intellectually, finishing at the pedagogical school in Przemyśl/Peremyshl. Then, she was active socially and in 1877 she founded the Society of Rusyn Ladies/Общество Русских Дам – the first organization of its kind, directed to Galician Rusyn women. Apart from that, she ran a boarding house for Rusyn girls. She was a member of M. Kachkovsky Association (its affiliates were located in many Rusyn villages in Lemkovyna), as well as Muza Literature Association. 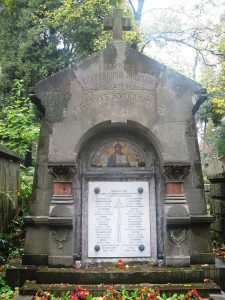 Aleksovich’s works found their place in the canon of Lemko literature. Over the years of fruitful work, she became recognized as an eminent writer among Rusyns. Taking into consideration the time in which she lived, it is not surprising that she wrote in iazychie – Rusyns’ literary language that enabled wider cognition of our history or struggles, used among contemporaneous Galician intelligentsia. Her works were directed to anyone – the  young and the elderly. The genres also varied – from poems to short stories, dramas and fairy-tales. She wrote patriotic works, works of manners, educational. The aim was to teach, encourage reflection, but also entertain. Among the most popular works are: dramas Запоморочена (Zapomorochena), Берко (Berko), for children: Двѣ сестрички (Two sisters), Подорожь Лядзѣ до Дѣдуся, Время летитъта, others: Народное повѣрье на Великой Руси, Заклятый медвѣдь ци Пѣсня Ольдины. Also, many articles by Aleksovich were published, printed in Galician periodicals «Зоря Галицка» (Galician Star), «Слово« (The word), «Учитель» (Teacher).

Klavdiya Aleksovich died on 15 October 1916. She was buried at the Lychakiv Cemetery in Lviv, in the Tomb of Russian journalists. where fourteen Galician-Russian social activists are buried. 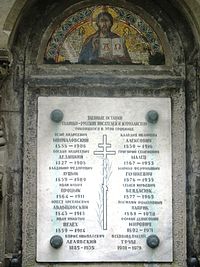 Monument at the Lychakiv Cemetery

For twenty four years, the idea behind Lemko Cultural Autumns has been to remember a person who dedicated their life to Lemkovyna. This year the time was for Klavdiya Aleksovich, that is why the XXIV Lemko Cultural Autumn, organized by the Lemko Association, took place in Krasna on the first day – a village where, apart from the First Lemko Lady, also our Teacher was from – Ivan Rusenko. For the first time in the history, birth or death anniversary of a person to whom the event was dedicated, overlapped with it.

Memories of Klavdiya Aleksovich had already been vivid before. In 2001, Terka Theatre Group from Ruska Bursa performed a play Отуманена (Drugged), translated from iazychie to the contemporary Lemko language, adapted and directed by Petro Trochanovsky. On the 100th anniversary of Klavdiya Aleksovich’s death, a picture of her was painted within the Ruska Bursa yard, next to the two first murals – of the national awakener Alexander Duchnovich and the already mentioned Teacher – Ivan Rusenko.