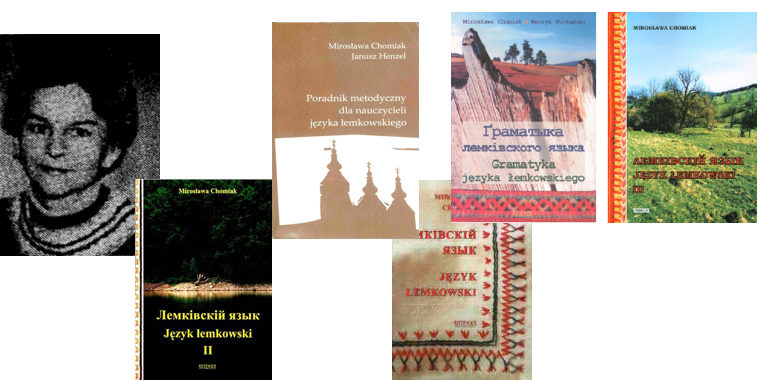 On 24 March 1942 Mirosława Chomiak was born –  pedagogician and cultural activist, mostly a  person who was one of the first right after 1989 to involve into works aiming for codification of Lemko standard of Rusyn language.

Mirosława Chomiak was born in Lemkovyna, Uście Ruskie, where from in 1947 she was resettled together with the family to the western lands of Poland. She managed to return to her home village in 1972 where she has been living until today. She graduated from Russian philology and she was teaching the language for about 40 years in school. When the first post-resettlement organization was established in Poland – the Lemko Association (April 1989) Mirosława Chomiak was one of the delegates for the I Congress of the organization, then she was elected as a member of the Main Board. At the same time, she actively participated in the first works of codification of Lemko variety of the Rusyn language. In “Besida” from 1990 (3-4/4-5) that was dedicated to the report from the I Congress of the Lemko Association, in the biographical entry of the newly chosen members we can read about M. Chomiak that she is […] the author of the first part of Lemko grammar (printed out), II part in progress. Mirosława Chomiak is one of the persons who in 1901 reactivated the Ruska Bursa Association that is the inheritor of Ruska Bursa.

When the Ministry of Education of the Republic of Poland allowed to establish the places of teaching Lemko at schools (1991), M. Chomiak wrote several student books for the primary classes: (1992-93, 1996), stories (1993, 1995) and dictionaries (1992, 1996-97), as well as the grammar – Lemko grammar for children – in 1992. Together with prof. Henryk Fontanski they wrote the first afterwar Lemko grammar (Grammarr of Lemko language – 2000) that became on of the basics of the contemporary standard of Rusyn literary language. Through the years of activity she was the organizer and active participant of seminaries for teachers of Lemko language. Mirosława Chomiak is an author of many books dediacated to teaching and methodology of Lemko language, some examples of which you can see above.