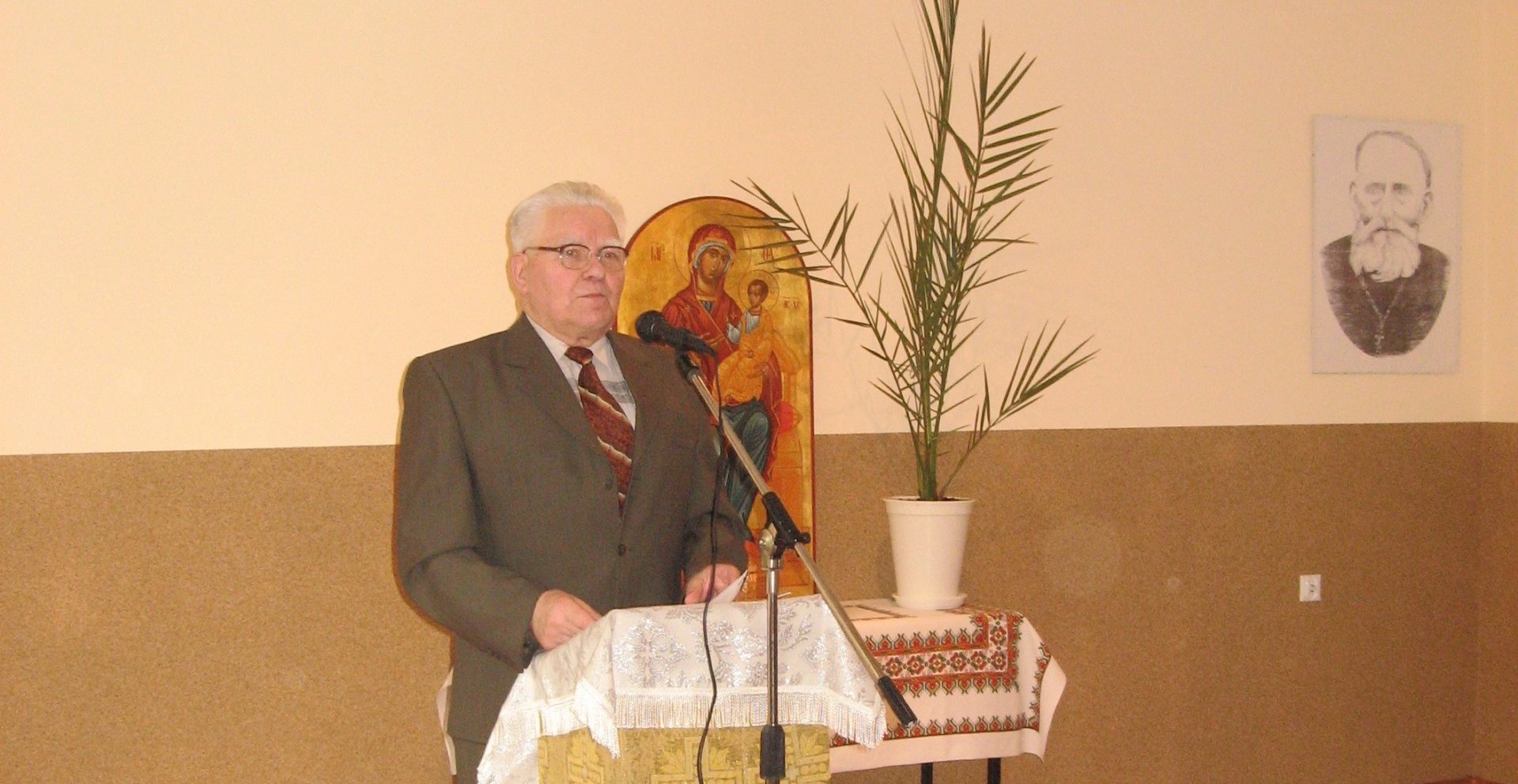 On 25 November 2016, 90th anniversary Adam Barna’s birth passed – a church deacon and writer who has been dedicating his life to church, as well as to artistic work – every time concerning the difficult Lemko lot.

Adam Barna was born on 25 November 1926 in the village of Chorne (Czarne, Gorlice county) in the middle Lemkovyna, as the oldest son of Shtefan and Anna (maiden name Kohut). There, he spent his youthfulness. As he was 21, he was resettled within the Vistula Operation. The generation of people born in the 1920s is nowadays treasure trove of information on Lemkovyna. The II WW broke out when Adam Barna was 13 years old. As the war was coming to an and, the young man had to wear a greatcoat of the Red Army’s soldier and, as a “volunteer” – fight in the ranks of the Red Army against the Hitlerites. His struggle did not finish with this. When he luckily returned home where his family was living, his mother village unexpectedly turned empty. Most of the Chorne inhabitants left voluntarily for the Soviet Ukraine.

After the time of – apparently the worst period in the history of Rusyns from Lemkovyna – even worse times came that damaged Lemkovyna completely – the resettlement of 1947. Together with his family and other ten families that had not left for Russia, Barna was deported on 10 June to, so called, Recovered Territories of Poland where he settled near the German river of Odra. In 1952 he moved to Legnica where he has been living to this day.

After the transformation in 1989 he actively involved into the activities of the first after-resettlement Lemko organization in Poland – the Lemko Association. During the first years of publishing Besida magazine, he helped in the editorial works, he also wrote the articles from time to time. He played a senior shepherd (Bacha) in the drama entitled “Vertep v Karpatach” (Вертеп в Карпатах) that was performed by the Lemko Association Theatre.

Adam Barna is one of the oldest church deacons in the contemporary Wrocław-Szczecin Eparchy of the Polish Autocephalous Orthodox Church. He was learning to read the church books and sing the songs already in his home village of Chorne, at the elbow of priest Pavlyshyn. One of the moments that has stayed in his memory for ever was consecration of a memorial for Thalerhof victims and a memorial for priest Maksym Sandowicz in 1934 where, during the festival that was simultaneously a national demonstration, he served as a 7-years-old boy. He started to work regularly for church after 1947, in the exile. From his numerous recollections we get to know that because of the absence of an Orthodox priest (a Catholic one refused to serve a funeral), he was made, to read the sticherons of a deacon and seal a grave, firstly of his grandmother and then of his uncle, who died during the first years of life in the exile. On 14 November 1947, he witnessed a historical event in Stodołowice (today Studzionki) where on the day of Saints Cosmas and Damian, the first Orthodox mass was served for the people who settled in the west Poland of Rusyns. Later on, he was a deacon in the church of the Exaltation of the Holy Cross in Rudna, then in Legnica where he has been actively participating in every mass until this day.

During his lifetime, Barna published several works on Lemko and church themes. He documented the parish life in the „Chronicle of the parish of the Orthodox church of Resurrection of the Lord in Legnica in 1948-1994” (nowadays he is working on a church chronicle that is to be published next year, on the 70th anniversary of the Vistula Operation). In 1993 he collected and published a hymn book for any occasions, in 1995 a brochure was published entitled «Жарты і оповіданя» (“Jokes and stories”) to which he contributed, later on he published a collection «Як я сой заспівам» (“Yak ya soy zaspivam”). Soon, in 1996, he published the «Народны весільны приспівкы» („Folk wedding short songs”) and the first monography of the village: «Кавальчык тернистой істориі села Чорне» (“A little bit of the thorny history of Chorne village”). In 1997 he wrote a comedy «Од презначыня свого не втечеш» („You cannot escape from your destiny”), as well as «Хронікa – літопис» (“Chronicle – codex”). A year later, in 1998, he translated to Lemko and completed the history of Kiryl Brejan – Izby inhabitant – who survived the whole period of fightings with general Anders, entitled: «Моя долга друга світова война» (“My long second world war”). In 2002, after several years of collecting materials and interviews with the oldest inhabitants, together with priest Andrij Kvoka, they published a comprehensive monography of Izby and Bieliczna villages, entitled: «Ізбы і Білична – давно і тепер» (“Izby and Bieliczna – in the past and now”). Two years later Barna published his own recollections in Polish «Z pamiętnika wysiedleńca» (“From the diary of the displaced”) and in 2005 together with Teodor Gocz, a precious publication concerning the period of the II WW, entitled: «Лемкы в борбі за свою і не свою свободу» (“Lemkos fighting for their and not their freedom”) – the reprint in Polish was published in 2012. It was the first publication ever that comprised and showed the lots of Lemko boys who were fighting in different armies and on different fronts during the war. Two following years are the years of publications to which Barna contributed, these were further comprehensive village monographies: «З жытя, обычаів і істориі села Боґуша» (“Life, customs and the history of Bogusza village”), as well as a monography of Piorunka village from 2007. In the same year, together with PhD Bogdan Horbal, they published a brochure dedicated to priest Dimitry Chylak. In 2008, thanks to Adam Barna, Lemkos were enriched by the book entitled «Хмары і сонце над Лемковином» (“Clouds and sun above Lemkovyna”), published in Rusyn and Polish. The book presents the oldest times of Rusyns in Lemkovyna, until today. In 1995-1999 Barna was publishing the «Ватряны Вісти» („Vatra News”). His new publication will be a chronicle of the Orthodox parish in Legnica, it will be published next year, on the 70th anniversary of the Vistula Operation. 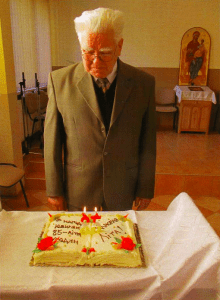 Adam Barna’s jubilee five years ago. Photo above: performance on the Day of Remembrance of priest Dimitry Chylak in 2007; provided by priest L.Worhacz