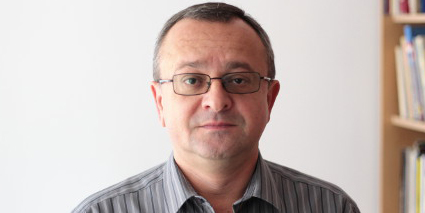 Fifty years ago, Alexander Duleba, a Rusyn political scientist, university professor and the first chairman of the Round Table of Rusyns in Slovakia, was born. Duleba’s focus is on the foreign policy of Slovakia, as well as domestic and foreign policy of the Western European countries, especially their attitude towards the European Union.

Alexander Duleba was born on 5 October 1966 in Svidnik. He spent his childhood in the Rusyn village of Beňadikovce/Бенядиківці, Svidnik region.

Between 1984-1989, he studied at the Philosophical Department at the Taras Shevchenko National University of Kyiv (Soviet Union back then). He got the Candidate of Sciences degree on the theory of politics at Comenius University in Bratislava. There, he got a postdoctoral in 2009. Duleba completed also internships – at the University of Bochum in 1992, the Uppsala University in Sweden (European studies) in 1995, as well as a practice within an individual NATO scholarship in 1996-1998.

From August 1990 until May 1993, he worked as a researcher in the Institute of Social and Political Sciences, Philosophical Department of the Pavol Jozef Šafárik University (today the University of Prešov). Then, he worked in the Slovak Institute for International studies, Ministry of Foreign Affairs of the Slovak Republic. From September 1995, he worked in the Slovak Foreign Policy Association (Slovenská spoločnosť pre zahraničnú politiku), head of which he has been since 2010. Nowadays, he also works as a university professor in Prešov, Slovakia, as well as abroad – in Tbilisi, Georgia, where he gives lectures. He is often invited for conferences, both in his home country and abroad. He was among those officially invited for the meeting in Vilnius in 2013, where discussions took place on the agreement between Ukraine and the EU. After the president of Ukraine’s immediate change of mind, the meeting finally did not take place.

Duleba deals with the issues of Rusyn national minority. In 2010, he was one of the prime movers in establishment of Our Country/Наш Край political party which aimed mainly at voting on candidates who were committed to Rusyn matters and region.

In October 2012, the Round Table of the Rusyns in Slovakia was founded. At the second meeting, 1 December 2012, the leadership was handed over to Alexander Duleba. He performed this function until spring 2013. He resigned from the post because of his professional duties, however, he remained the main coordinator of a document entitled Program for development of the Rusyn national minority in the Slovak Republic. The project was finished and adopted in May 2015.

Duleba is an author of many professional papers and academic articles. He lives in Bratislava.

ARTICLE WRITTEN ACCORDING TO THE STANDARDS OF RUSYN LANGUAGE