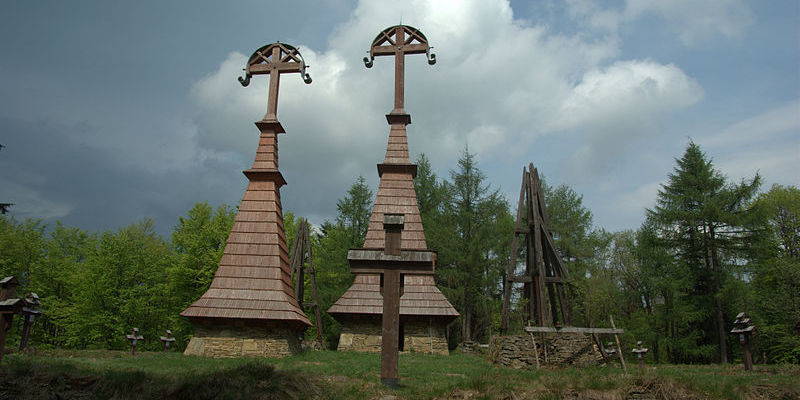 The cemetery at Regietów Rotunda belongs to one of the most beautiful military cemeteries located at the territory of the southern Poland. They were built as the place of rest of a big number of Austrian and Russian soldiers that fought at the territory of Galicia during the I World War. Some of the cemeteries within a period of over 100 years crumbled, thus history lovers, including Beskid Niski lovers, particularly Lemkovyna, deal with saving them from crumbling.

As Gazeta Krakowska announced, at one of the cemeteries located in Lemkovyna, renovation works are being carried out, step by step. It is about cemetery No 51 located at Rotunda, a mountain that towers above Regietów. Until today they succeeded to renovate all the towers at the cemetery which, apart from being the place of eternal rest, because of Dusan Jurkowic, appears to be an architectural masterpiece. As Dymitr Rydzanicz, the vogt of Uście Gorlickie commune told Gazeta Krakowska, 700 thousand zlotys were spent for renovation of all the 5 towers at Rotunda. The modernisation lasted since 2009 and was finished at the end of this year. The accomplishment of modernisation (actually, a total restoration), constitutes almost one of the several stages of renovation of the whole cemetery complex at Rotunda. In the future there are plans to rebuild the stone fenc, the gate and recreate the graves.

An interesting idea was opening the top of the Rotunda – in such a way that the cemetery be visible from the bottom of the village, as well as from ther hills. And although tree cutting evokes criticism from the side of environmentalists, it could do good for the cemetery, an architectural masterpiece of the region. It is worth to remember that 100 years ago the tops of many Rusyn mountains were not wooded, as the pastures and glades would reach very high. This was the case with Rotunda that towers above Regietów Wyżny. Based on photographies from the times of the cemetery’s formation, we can see that the mountain was a big glade, not a forest like today. Cutting trees on the top of Rotunda would allow for restoration of the original landscape which should be visible not only by renovation of the cemetery, but also in this that it be visible from a distance – in such a way that it make the impression of architectural and landscape unity. It is assumed that the cemetery used to be visible from the other nearby villages.

On the top of Rotunda there are 42 of Austrian-Hungarian army soldiers and 12 Russians soldiers buried who died at the time of battles in February/March 1915 in the area of Regietów. The object was designed by a Slovak architect Dusan Jurkovic, it has the shape of a circle, it is surrounded by a stone wall, the renovation of which is planned for the following years. The reconstructed towers stand in the middle of the cemetery. The highest of them is 16 metres high and the lateral four towers – 12 metres high. The first plans of reconstruction of the cemetery at Rotunda appeared together with the 88th anniversary of the Battle of Gorlice, however, back then the place was just cleaned and cleared of thorns.

Interestingly enough, when it comes to their architecture, the towers stick to the Lemko sacred style, both 100 years ago and nowadays, after the renovation. This is the way Dusan Jurkovic designed them. He designed many similar towers in the other areas of Galicia. There is a stone board at the cemetery where a Maltese cross is sculpted, as well as a poem in German by Hans Hauptmann (an oficer of the Austrian-Hungarian army, a co-author of the Western-Galician military cemeteries), the first words of which can be translated as: “Do not cry because of the fact that we are lying so far from people…”

There are many similar cemeteries in other Lemko villages, there are particularly beautiful ones in the nearby Magura or the one that towers above Konieczna, the renovation works of which ended recently.

source of the main photography: Wikipedia – cemetery in the initial stage; archive: according to www.beskid-niski.pl, where you can have a virtual journey through the cemetery No 51.