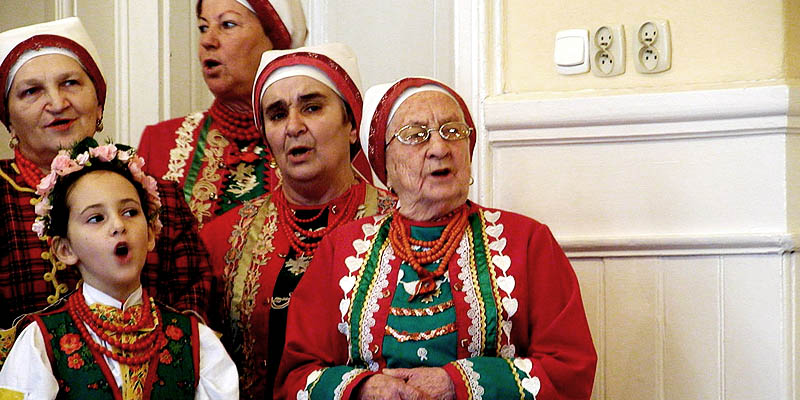 Indians of Mexico, Celtic Manx people (from the Isle of Man), inhabitants of Guernsey territory (Normandy), Kashubians, Lemkos, as well as researchers from the universities in the Netherlands, Great Britain and Poland, have arrived in Wilamowice, a small town near Bielsko-Biała. What brought them here was one of the most endangered languages in the world – luckily, it is not Lemko yet (although Lemko belongs to the group of the endangered ones, as well), but the Vilamovian language.

The Vilamovian language is used by only several dozen people. According to the statistics, one language dies every 14 days. Thanks to the involvement of researchers, as well as representatives of ethnic and language minorities, there is now hope for bringing it to a stop. The meeting in Wilamowice is one of the activities. Wilamowice has been a world research center for endangered languages for 11 days (from 18 – 28 September 2016). The Indians of Mexico, inhabitants of Guernsey territory, Celtic Manx people, Scandinavian Laplanders, Buryats of Mongolia, Basques, Scots, Spiš Gorals, Carpathian Germans with their Hopgarten dialect, Kashubians, Lemkos, Silesians, Hutsuls and Poleshuks, together with scientists, experts and activists, are going to make research, take part in seminars and workshops within the time mentioned. The people present will have the opportunity to share opinions on the problem of endangered languages, as well as to share experience related to actions aiming to save the languages. The guests, coming from various parts of the world, together with the Vilamovians will be working, among others, on the idea of establishment a museum in Wilamowice and edition of a student’s book to study Vilamovian language – for the young and for the adults. Apart from discussions and workshops, some cultural events have been planned – on 25 September, the local artists are going to perform an adaptation of, the Vilamovian Florian Biesik’s poem entitled Óf jer wełt (In the other world). The author, inspired by the Divine Comedy, “turned” it into the Vilamovian climate of 1921 – the sky, purgatory, the hell – all of the places are filled with Vilamovians living during the author’s lifetime.

The meeting is a part of a bigger project that has been continuing for a long time, the aim of which is revitalization of endangered languages. The basis for the activities was receiving a prestigious European grant within the Horizon 2020 program. It was granted to an international group of researchers under the directorship of the Liberal Arts Department of the University of Warsaw. The coordinator of the project is Justyna Olko, Ph.D. (who was also a guest on our LEM.fm radio), who has been researching and working on revitalization of endangered languages for some years. She is also a director of the Endangered Languages project  which deals with the Lemko language as well. You can read about the project in Ruska Bursa Yearbook 2013.