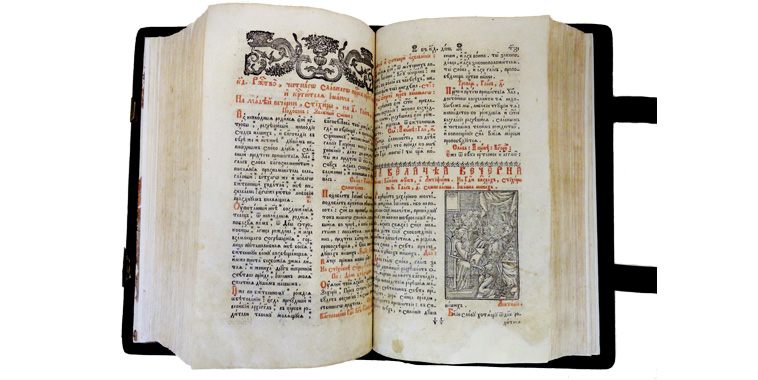 Eparchy Center of the Orthodox Culture “Elpis” in Gorlice finished a project of 2016 which was the continuation of works on maintenance of old church prints from XVII and XVIII centuries. The prints were the part of the Center’s collection. The maintenance covered 4 books from the following Lemko villages: Bielanka, Ropki and Bartne. These books were: Fasting Triodion from 1688, Festal Menaion from 1694, another one from 1757 and Euchologion from 1739.

The books were printed in the contemporaneous monastery printers in Lviv, Pochajev and Uniov. All of them have handwritten notes on the margins. Apart from maintenance, the prints were also digitalized. The project was realized thanks to the support of Ministry of Culture and National Heritage, the Lower Poland Voivodeship and the Provincial Monument Preservation Office in Kraków.

This year, “Elpis” covered under digitalization also the heritage from the late Archbishop Adam – Orthodox bishop of the Przemyśl-Nowy Sącz Eparchy who died in July 2016. Among the Archbishop’s documents, among others a typescript of priest John Polyanskij’s paper was included, a chancellor of the Apostolic Administration of Lemkovyna, entitled Ethnic background of Lemkos and struggle for historical truth.

The main aim of “Elpis” is documentation of the spiritual and material culture of Lemkos. One of their task is stocktaking of Lemko cemeteries in the Gorlice County, the result of which was publishing of three volumes which described cemeteries of several Lemko villages from Sękowa and Uście Gorlickie Communes. The volumes include the cemeteries’ topography, photos of some memorials, their description, drawings and dimensions. The center is in possession of a big collection of church prints. Within the last few years, some of the prints have undergone professional conservation. They are further exhibited in the Eparchy Museum which functions by “Elpis.” Six years ago, “Elpis” printed out a catalogue where church prints from the XVII and XVIII centuries were described. Overall, 47 printings were described there and photographies of some pages were included. The prints that have been already digitalized are available on okp-elpis.pl. Apart from the prints, also scans of other publications from the center’s collection may be found there, as for example Lemko pre-war publications printed out in the USA.

Soon, “Elpis” is organizing a conference entitled The Bible and present – theological, canonic and social word of the Bible for the contemporary. It will take place on 22 November 2016 in the Exhibition and Conference Centre “Castle in Szymbark.”