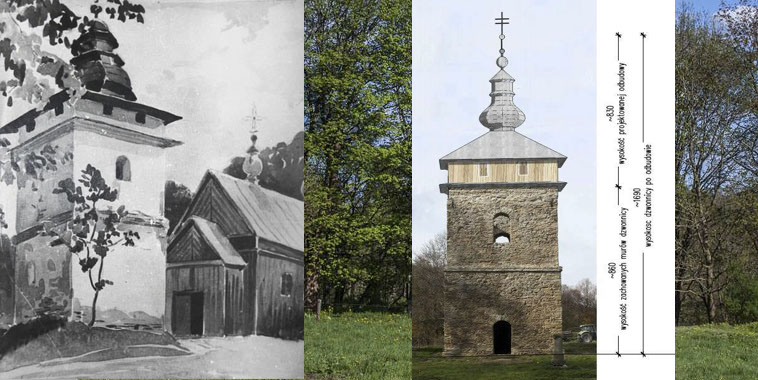 Further renovation works will be carried out in Polany Surowiczne – a village located in the eastern Lemkovyna. It is a continuation of reconstruction of the brick-built bell tower that has  completely crumbled in the last 65 years and since 2012 the original look has been restored to it regularly.

According to the main organizer of the works, recently the activists succeeded to meet the vogt of the Jaśliska Commune – Adam Dańczak, as well as the secretary, who got to know the schedule of works for the current year. The organizers of the renovation works discussed also the issue of cooperation with the commune and the vogt approved of the whole project. Apart from that, Jaśliska Commune became a partner of the project concerning renovation of the Greek Catholic tower bell in Polany Surowiczne.

The renovation works’ organizers are mainly volunteers from the Tourist Club Styki Association, Student Circle of Beskid Guides Warsaw and Magurycz Association who have been carrying out the tower bell’s renovation for several ages (step by step), the tower bell is located in the already nonexistent village. In 2012 the walls were protected, in 2014 the roof was covered with a wooden roof that is to be replaced by a reconstructed one soon – roof that used to surmount it seventy years ago, with a dome and a cross.

One of the main aims of the volunteers was to regulate the legal standing of the tower bell. Since 2015 the owner of the land on which it is standing has been the “Sarepta” Greek Catholic Youth Association from Nowica. In this way, the tower bell symbolically returned to the Greek Catholic Church.

We would like to suggest that you can endow the project of saving the Lemko tower bell by transferring money for the account of the “Sarepta” Greek Catholic Youth Association.

Information on the account to which you can transfer money:

You can find details on the website of the project.