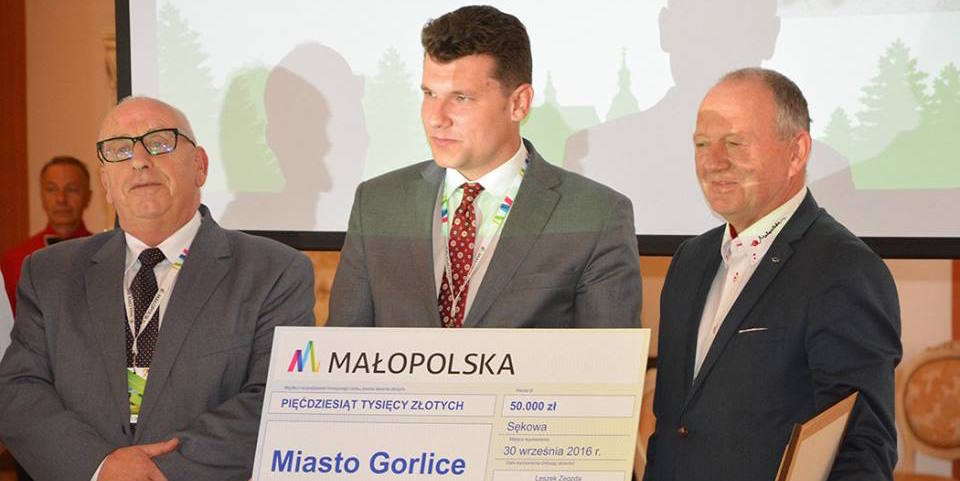 In August 2016 we informed on our website that voting for the “Great Discovery of Lesser Poland” started. Now we are reporting about the end of voting and about the laureates who got the biggest number of votes in particular categories. The main prize of 50.000zl went to the town of Gorlice, which simultaneously became the host of the next year’s plebiscite.

The Award Gala took place on 3 October 2016 in the village Sękowa. The town of Gorlice, where the Ruska Bursa, as well as the first professional LEM.fm media are located, was represented by Mayor Rafał Kukla, to whom the check for the award was granted. Others were awarded in the following categories: Unique Place, Tourist Attraction, Event, Delicious and Traditional, Being a Guest, House with Atmosphere, as well as Tour Guide.

It is standard that among the nominees in the plebiscite, which takes place in Lesser Poland, include tourist attractions, places, events and people who are somehow related to Central and Western Lemkovyna, today also the Lesser Poland Voivodeship. This year’s nominees from Lemkovyna were Saint Michael Greek Catholic church from Bieliczna (Білична/Bilychna), towns: Gorlice, Krynica, as well as the villages: Маластів/Małastów and Шымбарк/Szymbark (the Lemko part of the village is called Долины/Valleys). In the Events category, the nominees were: the Jan Kiepura Festival in Krynica, Muzyka Zaklęta w Drewnie (Enchanted Music in the Woods), Open air operas in Regetów (Регетів/Regetiv) and Festiwal Dzieci Gór/Festival of the Children of Mountains in Nowy Sącz. The last category where a Lemko accent was also present was the Delicious and Traditional category. Here, nominees were the Lemko tavern in Krynica and the tavern “Huculanka” in Regetów. Apart from the aforementioned categories, voting for several hotels and agrotourism farms located in Lemko villages was possible. In the Tourist Guide category, one of the nominees was the custodian of the Church of St. Paraskeva in Kwiatoń – Jan Hyra. Voting was open until 6 September 2016.