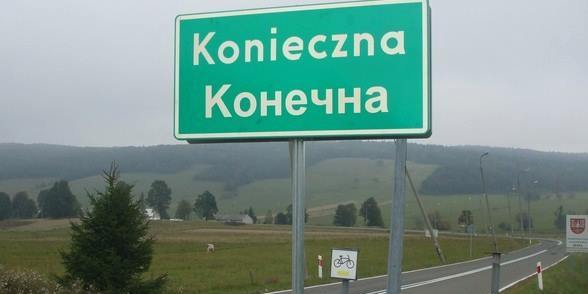 The year of 2017 will be a sad year for Rusyns from Lemkovyna,  as we will celebrate the 70th anniversary of the Vistula Operation. However, apart from reflections about the past, as well as paying respect to the victims of the exile, it is also a year that will give the possibility of internal reflections, to think about what roads Lemkos take nowadays, after long years of being bushwhackers, where their place is today and what has been left from the original Lemkovyna. One of the first initiatives that has already been planned for 2017 is a meeting of the former and current inhabitants of a Rusyn village of Konieczna. The village, similarly to many other villages, is a border not only between Poland and Slovakia, it is mainly a border between the historical Lemkovyna and Presovian Rus’.

In relation to the sad anniversary of exile, Konieczna inhabitants feel the duty to prove that nowadays their village still exists and it is Lemko. Thus, in half a year, from 21-23 July 2017, they plan to gather in the newly-renovated former local school. The organizers invite everyone who have some connections with the village. Apart from prayers for their relatives and victims of the Vistula Operation, the event is planned to include a meeting filled with history and recollections about the village. In order to get information about the event, contact Andrzej Ksenycz (+48 608 45 42 46) or the village administrator Piotr Bołdyś (+48 512 181 666).  The event is also promoted on Facebook where you can attend it.

As mentioned above, the meeting will take place in the former school that nowadays functions as the village common  room. Thanks to the financial support of the Uście Gorlickie Commune, the school was entirely renovated last year and recently (14 January – on the remembrance day of St Basilius the Great) – it was blessed. The event was related to the local parish kermess which, apart from the local priest Arkadiusz Barańczuk, was attended also by priests from Krynica, Bartne and the neighbouring Becherov located in the Presovian Rus’. After the Holy Mass, people and the invited guests, including the commune’s vogt Dymitr Rydzanicz and the head of Gorlice County Karol Górski, took part in blessing of the renovated school. It was built in 1926 for the inhabitants’ personal money and until 1947 it served as school for many Rusyn children. After 1956, when some families succeeded to return to the village, children continued to go to the school and then it was closed. It was not used until these times. According to the vogt Rydzanicz, there are plans to build some roofed camp-fire place near the school where people could meet during the summertime.

One of the local TVs was present at the blessing of the common room in Konieczna. Here you can find the material from the event.