Collective Assembly of the Society of St. John the Baptist 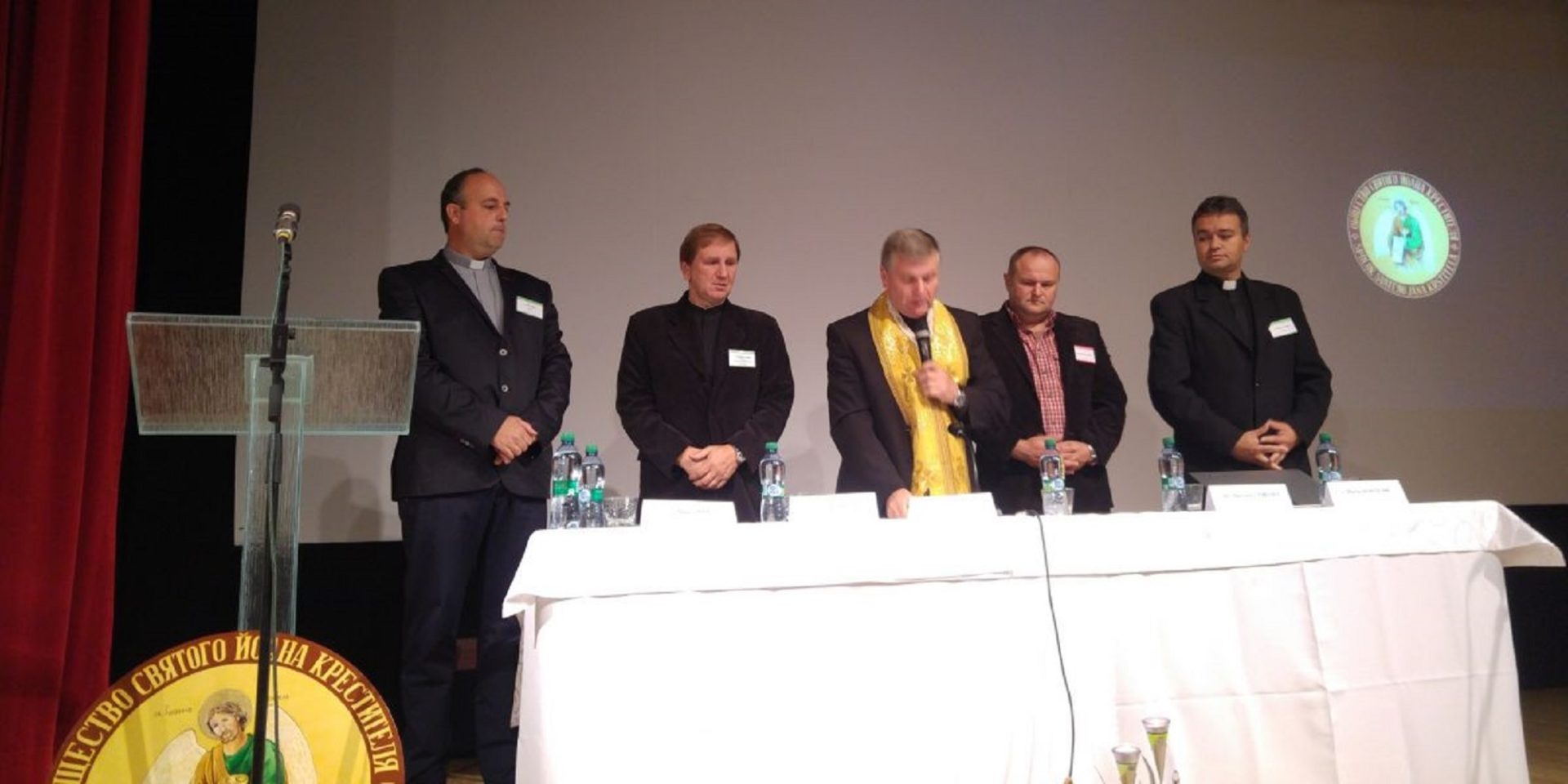 The collective assembly of the St. John the Baptist Society, which took place on Saturday 24 September, began with a congregational prayer. In one of the rooms of the Community Center building, on a stage decorated with the seal of the Society and the Rusyn national crest, the representatives of the association took seats (mainly Greek Catholic priests, each of the representatives spoke one after the other).

The head, Rev. Jaroslav Popovec, gave a speech in which he referred to the tradition of the society that was established by priest Alexander Duchnovic in 1862. Nowadays, it gathers together Greek Catholic people of Rusyn nationality and protects language rights of the believers within the Church sphere. Further, Rev. Martin Kostilnik presented a video that summed up all the activities of the society, since the last large meeting in 2011. Then, the invited guests gave their speeches. The secretary of the Ministry of Education of Slovakia – Peter Krajnak – welcomed all the attendees, as he remarked, of the second largest Rusyn organization in Slovakia, and he spoke about the need to develop teaching Rusyn in schools. He emphasized the lack of visible effects of Rusyn education in Slovakia and he said that should be the issue to solve by all the social organizations. Further, Martin Karas, a representative of the Rusynska Obroda (Rusyn Renaissance Society) spoke. He gave a two-volume Slovak-Rusyn dictionary to the audience. Also, Peter Macko from Kosice, a representative of the young.Rusyns organization said a few words. Other greetings that came in written forms were read out by Rev. John Barna. The senders were: Milos Stronchek from ROS organization in Svidnik, the Round Table of Rusyns in Slovakia and Anna Plishkova, Ph.D., from the Institute of Rusyn Language and Culture at Prešov University.

A letter from the Prešov archbishop and metropolitan John Babjak was read out. The archbishop sent greetings and a blessing to all the participants.

Priest Francis Krajnak from Kamienka gave a speech on Rusyn church translations. He focused on the meaning and understanding of the literary language in every part of life, mainly in the liturgical area.

A practical part of the meeting that completed and emphasized the importance of the speeches, was a personal request to the attendants by John Kalinyak. He suggested to sing a memorial service, at least some extracts, in remembrance of Rev. Alexander Pavlovich whose grave is located near the church in Svidnik.

In the second part, Rev. Ihor Panchak provided some information concerning membership in the organization, and Slavomir Cherevka told about the activity of the council of lay believers. The entire meeting was lead by Rev. Milan Yasyk, the Deputy Editor in Chief of Greek Catholic Rusyn quarterly Artos.