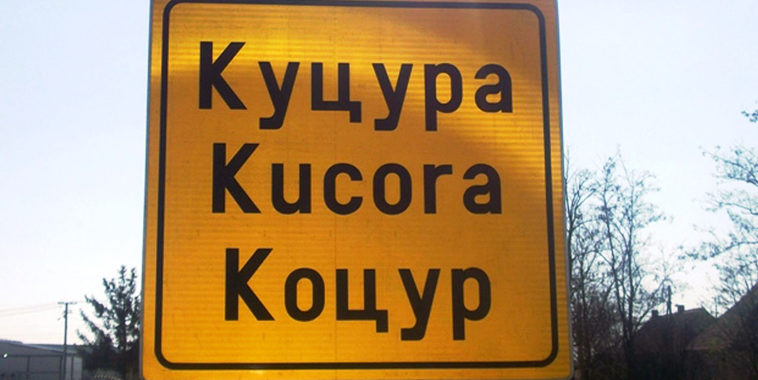 In one of Rusyn villages in Vojvodina – Kocur – three-language boards were set with the name of the village, including certainly the Rusyn version – according to the local press agency Ruthenpress. The boards were set on the roads on exit in the direction of Berbas and Savino Selo. Apart from that, a similar board was put on the local depot. According to the language law of the Serbia Republic, topographical names of places are written in Serbian and other languages where there is the necessary percent number of some minority. In the case of Kocur, the boards are in three languages: Serbian, Hungarian and Rusyn. The reason for setting new boards there is related to the fact that the Hungarian version of the inscription had been incorrectly spelled before. Within the state policy regarding minorities, the village of Kocur was given also some means to create and set three-language bords with the names of streets. In Kocur these will be names written in Serbian, Hungarian and Rusyn.

Similar inscriptions can be encountered in Poland and Slovakia. The Polish law on national and ethnic minorities and regional language of 6th January 2005, according to art.12 act 7 chapter 2 says that additional name of a place or physiographic object in the language of minority can be set up on the request of the commune. On the basis of the mentioned article the CZUHA Association of Lemko Youth in Poland succeeded to get double Polish-Rusyn boards set in Lemkovyna. The first one was set on 24 November 2008 in Gorlice commune, Bielanka village. Three years later, on 17 November 2011 in the Uście Gorlickie Commune (in the past Uście Ruskie), 8 Lemko boards were introduced in Blechnarka, Gładyszów, Konieczna, Kunkowa, Nowica, Regetów, Ropki and Zdynia.

It is similaar in the Slovak Republic where, in comparison to Poland, the number or not only Rusyn boards is bigger. It stems from the fact that Slovakia is settled by a bigger number of national and ethnic minorities that live (not as for example Rusyns in Poland) together, constituting minimal number of inabitants required by the law, and then the double or three-language boards can be set up. In Slovakia, apart from many names in Rusyn we can encounter names in Hungarian or Romanian. As in Vojvodina, the language policy in Slovakia refers not only to the names of places. As we informed two weeks ago on lem.fm website, in Medzilaborce at the railway station there will be a board with the stop name in two languages: Slovak and Rusyn (more information here).

After analysis of the ratio of majority to the names in a language of minority, unfortunately we need to admit this looks much better in Slovakia or Serbia. Let us remind in Lemkovyna recently we encountered a few acts of vandalism, intolerance and xenophobic attitudes when double Polish-Lemko boards  with the following names of villages got damaged: Ropki, Gładyszów, Regetów and before that the board in Bielanka got damaged for a few times. Unortunately, the problem has not been yet presented at the ministerial level, although prof. Stefan Dudra and PhD Mirosława Kopystiańska in October 2016 at the meeting of organizations in Legnica announced they would deal with the issue in the ministry in December last year.We still do not know whether the case was presented to the Committee and other ministerial officials. From the information given by the Ombudsman PhD Adam Bodnar to the Lemko Association at a private meeting with the organization, we got to know that in a situation when such incidents happen – damaging double boards in Lemkovyna, the best way is to report the Ombudsman’s office in Warsaw and he would take further actions, including reporting the prosecutor’s office.