Russian soldiers will be buried in Osadné village 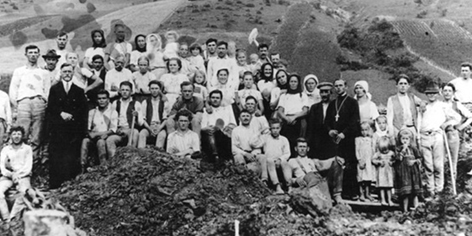 In the Rusyn village of Osadné (formerly Телепівці/Telepivci), Snina District, on Thursday, 13 October 2016, remains of unknown Russian soldiers from the First World War will be buried. They were found in the nearby forests by Polish tourists, according to Korzár daily.

As Petro Soroka, the Orthodox priest from Osadné informed the daily, the tourists collected the remains, put them into bags and buried them under a nearby beech tree. As the Ministry of Interior of the Slovak Republic had been informed about this, they enabled exhumation and burial of the remains at the local cemetery.

The Thursday funeral will be served by the highest representative of Orthodox Church in the Czech lands, Archbishop of Prešov, Metropolitan of the Czech Lands and Slovakia, Rostislav. The services will be also attended by members of Slovak-Russian Ministry of Interior commission that is concerned with war graves, the Russian Ambassador Alexey Fedotov, as well as the legend of Soviet and Russian hockey, Viacheslav Fetisov, who will be visiting Osadné for the second time.

Heavy battles took place in the Osadné area during the First World War, mainly in 1915, and they resulted in many victims. Few of the soldiers were buried at the military cemetery, most of them remained where they died. Many soldiers’ remains were exhumed in 1929 when the Orthodox church was built in the village. The corpses were moved in 1933-1934 to a crypt below the church, as Petro Soroka informed the daily. However, only 1025 soldiers were moved to the crypt, there was no place for more. That is why the remaining 1467 soldiers were buried at the local cemetery. According to the local priest, there are still many war victims left within the forest area. There, corpses of Russian soldiers were also found.

According to the Orthodox priest, there is evidence for the fact that they were Russian soldiers – they had icons of the Mother of God with them, Orthodox crosses, buttons from Russian uniforms, as well as remains of Russian tools.