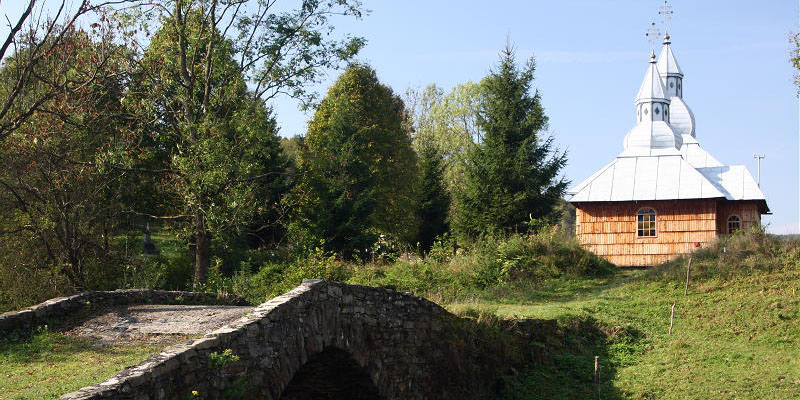 An antique bridge in Olchowiec (Dukla District), in Lemkovyna, has lived to see the day of its renovation. Its construction is being secured against settling and future ballooning.

The renovation of the bridge is to be finished at the end of October this year. The bridge is located over Vilkhivchyk creek, which leads to the Greek Catholic church and the local cemetery. The works have been already started. The stone bridge is an architectural monument. It was entered into the national register of monuments in 2007 at the initiative of the Terka Association, whose office is located in Świątkowa Wielka (Святкова Велика, Sviatkova Velyka). The problem of crumbling bridge has been reported to the Dukla Commune by the local community some time ago, headed by Vilkhovets’s village administrator, Zenon Fedak. As the bridge is located within the municipality, the issue has been taken care of by the government. After the proper applications were submitted, the works entered in the municipal budget and financial support from the Subcarpathian Preservation of Monuments has been received, the renovations started.

Renovations of the stone bridge will cost more than 30 thousand złoty. Half of the amont was gathered by the Dukla Commune, the rest is a subsidy of the Subcarpathian Preservationist of Monuments. The renovations are supervised by the Preservationists.

Olchowiec (Вільховец, Vilkhovets) is a Lemko village located in the middle of the Lower Beskid. The village’s name originates from a tree name – alder (ольхa/olkha). It was founded within the Vlach law in the first half of the 16th century and until the middle of  19th century it was in the possession of the Stadnicki family. In 1791, a church was bought, probably within the area of today’s Slovakia, it was then moved to Olchowiec. In 1880, there were 400 inhabitants in the village. During the interwar times, a school was built there and the land consolidation in 1935 caused development, as well as better material conditions of the inhabitants. In 1934, a new church of The Translation of the Relics of Saint Nicholas was built next to the old church, which was already in bad condition. Although the church was damaged during World War II, it has remained in its original place to this day.

Although the village was resettled in 1940s (1944 to the Soviet Union and 1947 within the Vistula operation), a few Lemko families stayed there. One of them owns a private museum (Tadeusz Kiełbasiński’s museum) in which Lemko relics, clothes, domestic tools and others are gathered. Once a year, the tradition of Lemko kermesh comes alive in the village. Since 1991, on the feast of the Translation of the Relics of Saint Nicholas (celebrated on 22 May), masses are served in the church, combined with a procession. Then, people gather to watch performances of ensembles and celebrate together by the community center.