There is no end to xenophobia – a board in Regetów damaged again! 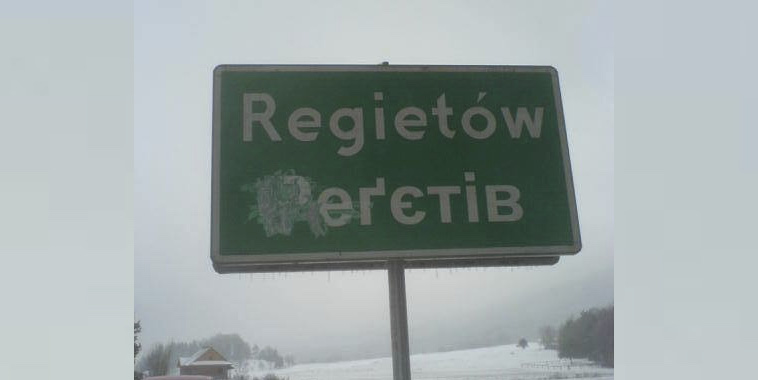 What happened yesterday in a Rusyn village of Regetów, Lemkovyna, cannot even be named as vandalism. The previous examples of damaging the double language boards with Lemko names of the villages are the basis for justified assumptions that it is an organized discriminatory action against Lemko ethnic minority, the rights of which are guaranteed by the Polish law. The offenders do not have the courage to damage the boards in a daylight, that is why, probably, it took place at night.

As lem.fm were informed by one of Regetów’s inhabitants: […] our board was probably damaged yesterday. We were driving from Skwirtne to our village and we saw the Lemko part of the board damaged. An incident of this kind is not only a violation of the basic law regarding national minorities (both international and the local), mainly it is considered as transgression, according to the Code of Petty Offences. As our informer adds: […] the offenders found a new way of damaging Lemko names. They no longer paint them, but scratch with some sharp tool so that the initial form cannot be restored […]. Just to remind, previous cases of this kind against the public weal of Uście Gorlickie Commune took place in August 2016 when the vandalists painted Lemko part of the board in Ropki. Not long ago, at night 30.09/01.10, non identified vandalists damaged three boards in Gładyszów village (from the side of Zdynia, Smerekowiec and Magura).

In Regetów, it has not been the first case of this kind. In October 2015, the same board was painted with black paint. As always, such incidents are reported to the police and, in that case, to Uście Gorlickie Commune,. We informed an activist of the Chuha Young Lemko Association in Poland about the incident, previously she made an intervention about such a case to proper entities – says Regetów’s inhabitant.

The previous incident concerning damaging the board in Gładyszów has not been, unfortunately, raised by the representatives of Lemko ethnic minority. In October 2016 prof. Stefan Dudra and PhD Mirosława announced that they will deal with the issue only at a meeting in the Ministry in December 2016. It would be desired that the representatives request for convoking of an extraordinary meeting of Joint Commission of Government and National and Ethnic Minorities at last, in order to present the ongoing problem of damaging Lemko boards. This is expected from them by Lemkos, most of all by inhabitants of the villages where the incidents take place that are simply violation of the basic rights of Lemko minority in Poland.