Favourite car of Andy Warhol will be shown in Moscow 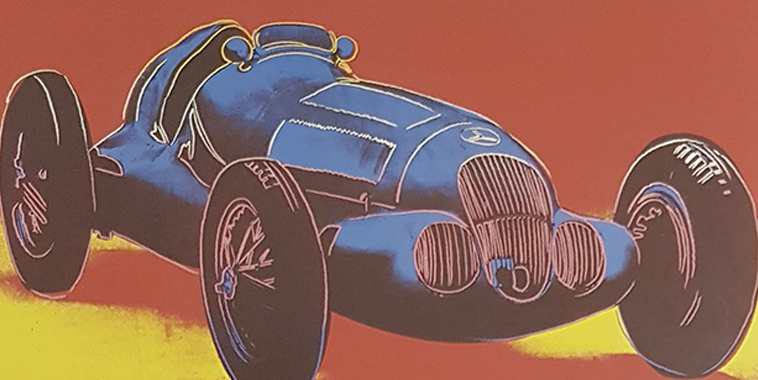 The exhibition will present 50 original pictures by the artist, among them – his favourite model of Mercedes-Benz 300 SL. The pictures will be divided into several themes: cars of the times of Warhol, antique models and futuristic cars. An additional outside-car complement of the exhibition will be a picture of popculture superstar from the 1950s and 1960s – a picture of Marilyn Monroe.

According to the organizers, the Mercedes-Benz 300 SL shown in the graphics is a symbol of the after-war wellness and attachment of Americans towards such idea of luxury and rich lifestyle.

The collection of works enitled Cars was made by Andy Warhol on order of Mercedes-Benz in 1986. A German art dealer, Hans Meier, ordered a picture of 300 SL first on the 100th anniversary of Mercedes. When Mercedes team saw the effect, they asked for a whole series to show the evolution of models from Benz Patent-Motorwagen from 1885, through Daimler Motor Carriage (1886), Mercedes 35 hp (1901), until Mercedes-Benz W125 and Mercedes-Benz C111.

The collection was not finished because of Andy’s death in 1987. Until that time the artist finished 36 serigraphies and 13 drawings of eight models. Warhol planned that the series count 80 works within which he wanted to show 20 models. When working, he would draw upon photographies of the cars. These were the first objects designed not by an American man, portrayed by Warhol.

Cars have been exhibited only twice so far: in Tubingen, Germany in 1988 and in Vienna in 2010. Half of the collection was presented in Milton Keynes, Great Britain, in 2001.

Cars collection was Warhol’s second automobile project. In 1979 BMW asked Warhol to paint their cars. In contrast to three previous artists who had painted BMW M1, Warhol did not want to show it in downgraded scale but in the original size. The news that spread later was that Warhol finished the painting in 23 minutes. 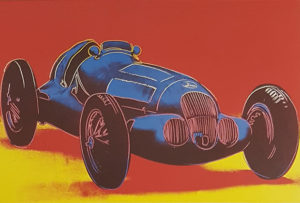 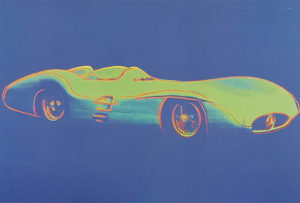 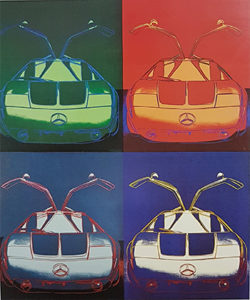