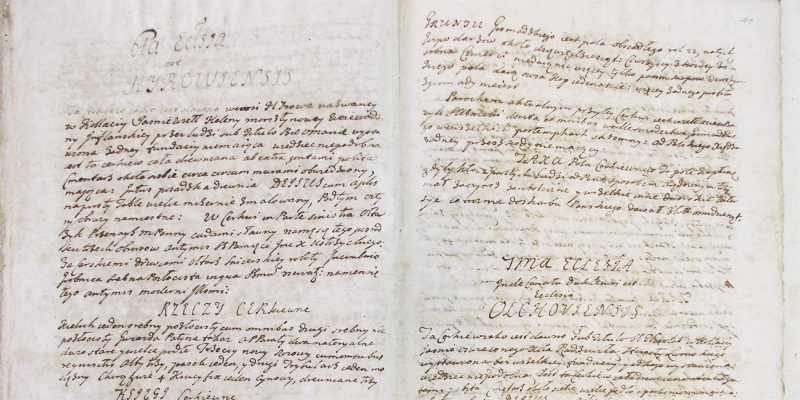 Next Friday, 31 March at 11AM in the National Archive in Przemyśl a promotion of a book will take place entitled Historical archive of the Przemyśl eparchy by PhD Anna Krochmal.

The book is a detailed guide through the archival collection of the Archive of Greek Catholic  Episcopate in Przemyśl (collection known as ABGK, in Polish: Archiwum Biskupstwa Greckokatolickiego). The book includes a part dedicated to the history of the eparchy, there is history described of the collection and a detailed contents of what is hidden behind the signatures. ABGK counts around 7000 of them. Lemkovyna from 1934 has been entirely within the eparchy, then most of the Lemko territory was included within borders of the Apostolic Administration of Lemkovyna – a separate administrative entity of the Greek Catholic Church.

The book promotion will be accompanied by a varnishing day of exhibition of paintings by Andrzej Żygadło entitled: Archival document as inspiration for an artist and reexposition from the National Archive in Przemyśl (the exhibition accompanied the scientific conference of the Union of Brest and its consequences in Polish and Ukrainian archival sources which took place last year, we informed about it on our website.

Phot. above: fragment of the XVIIIth century inspection of Dukla deanery from the Archive of Greek Catholic Episcopate. 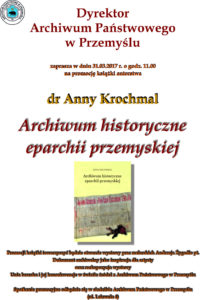 Anna Krochmal – PhD of history, a graduate of the Catholic Lublin University. In 1989 she defended her MA thesis entitled Orthodox clergy of the Warsaw-Chełm eparchy in 1865-1905 and in 1995 she got a doctor’s degree of humanistic sciences based on dissertation work: Relations between Greek Catholic and Latin priests in the Przemyśl eparchy in 1918-1939. Since 1989 she has been working in the National Arrchive in Przemyśl. Her interests are focused mainly on the history of Greek Catholic and Orthodox Churches in XIX-XX centuries, mainly when it comes to their co-existence with other creeds. She is the author of a guidebook Confession figures in the collection of the National Archive in Przemyśl and numerous articles and reviews, for example Relations between Greek Catholic and Orthodox peple in Lemkovyna in 1926-1939.

Andrzej Żygadło – graduate of the Kraków Academy of Fine Arts, department of Painting; student of the last year at the Department of Conservation and Restoration of Works of Art. He is an eminent expert and passionate of wooden architecture of the southern Poland, mainly the church-related one. The motif of a church is often present in his paintings. One of the last exhibitions presenting his works was an exhibition presented in the gallery of one of the bigget auction houses in Poland Desa Unicum, the exhibition entitled Zapis. He actively works for preservation of wooden monuments.