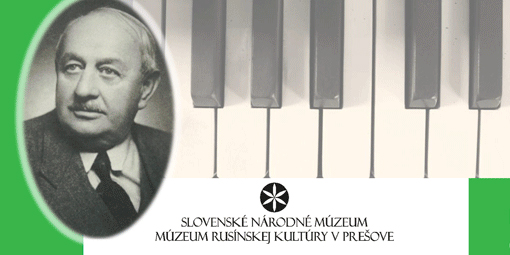 On 11 October 2016 at 4PM, in the Slovak National Museum – Museum of Rusyn Culture in Prešov, the opening of an exhibit will take place, entitled: „Ґуна і сын – Гармонія“ (“Huna and son – Harmonica”).

The exhibition is dedicated to Julij Huna (Юлій Ґунa), a producer of organs, harmoniums and pianos. He was born in 1882 in Uzhorod. After founding a company producing musical instruments in Prešov, he included his instruments and produced them in the territory of today’s Slovakia, Poland, Czech Republic and Hungary. The owner of two original functional harmoniums from Julij Huna is Jan Brehovi from Šarišské Lúky, who loaned them for the exhibition together with some text material and photographies.

“Visitors will be interested also in those persons (inhabitants of Prešov) who have been almost forgotten, but their knowledge made a great impact, which is still visible. The exhibition’s opening will be accompanied by musical instruments, the charm of which has not been taken away even after several decades. Visitors of all age categories, not only musicians or history experts may confirm that,” according to the Slovak lovak National Museum – Museum of Rusyn Culture in Prešov.