Inheritance from Barbara Tondos and Jerzy Tur in Ruska Bursa 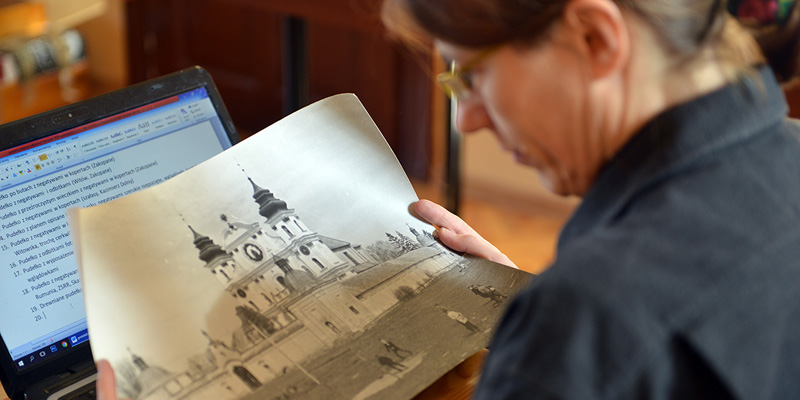 On Friday, 4 November 2016, a particular photo archive came down to Ruska Bursa in Gorlice. It consists of several hundreds thousands (!) of archive photos concerning historical and cultural lanscape of the Sub-Carpathians, the Lesser Poland, Podhale, Lublin Province, as well as Slovakia, Ukraine  and Romania.

The archive is an inheritance from the marriage of eminent Polish researchers on material heritage of the South-Eastern Poland – Barbara Tondos and Jerzy Tur. The collection will be stored in Ruska Bursa as a deposit, it was handed over to the association by the researchers’ daughter – Katarzyna Tur-Marciszuk, an art historian.

Since the 1950s, B. Tondos and J. Tur have been carrying out conservationist and stocktaking works within the former Rzeszów Voivodeship (back then its area covered today’s entire Subcarpathian Voivodeship and Gorlice County – i.e. a big part of Lemkovyna). Jerzy Tur was an art historian. He was a Voivodeship Conservationist in 1956-1967. He was a regarded researcher on wooden architecture, among others church and defense architecture. One of his numerous initial activities (back then, the area of the Rzeszów Voivodeship was big and it covered many other precious monuments that needed an immediate taking care of) that were taken up soon after he entered upon Voivodeship Conservationist’s office, was marking and recording objects, their equipment ornamentation within territories affected by the Vistula Operation. Jerzy Tur tried to organize necessary conservation works regarding objects that he recognized and was able to reach. He was one of the initiators of The Museum of Folk Architecture in Sanok foundation in 1958, the museum covered also the issues of Lemkos, Boykos, Pogórzanie and Dolinianie. Thanks to him, a compilation of mobile monuments was established in the Museum-Castle in Łańcut in 1960. Thanks to Barbara Tondos that was the manager of the project, the Voivodeship Conservationist Studio was founded. It works by the museum and deals with conservation of church art monuments.

The fact of saving those precious artefacts by Barbara Tondos, which came from deserted, empty churches (and if it had not been for her, they would have been destined for damage, devastation or robbery, which happened to many artefacts), allowed for creation of a museum axhibiton  – Affiliate of Church Art. Nowadays it is the biggest icon collection in Poland.

Jerzy Tur and Barbara Tondos paid much attention to conservationist documentation, research, records and stocktaking of monuments. The evidence for that are, among others, numerous photos. In 1966, Jerzy Tur instituted one of the first in Poland, an Office for the Documentation of Historical Monuments in Rzeszów (an office in Bydgoszcz was then instituted on this pattern). The marriage enjoyed work in the field, they loved direct contact with monuments and nature. They traveled a lot. They were delighted with churches, jewish cemeteries and other monuments’ beauty and value that they represented, they were moved by the history. The couple’s sensitivity was expressed not only in saving monuments, they had wide range of interests. Barbara Tondos was also a poet. 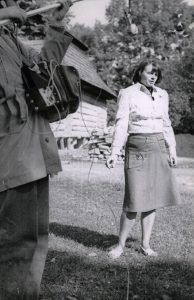 Saving churches and their equipment was one of the marriage’s activities. Thanks to them, around several thousands of elements of church equipment were saved from total damage. Some of them are available at the exhibitions in the Museum-Castle in Łańcut, some were given to needy parishes later on, as for example an original iconostasis returned to the church in Kotań, some other was handed over to Olchowiec. This year, part of the photos of inheritance from Barbara Tondos and Jerzy Tur were available within an exhibition entitled: Monuments of the Carpathian wastelands. The exhibition was presented in Kraków, Lublin, Warszawa and Rzeszów. 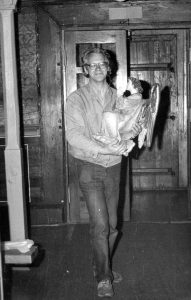 The collection in Ruska Bursa consists of 57 chests with archival photos, negatives (including 11 chests with glass negatives that present mainly artistic craft from Zakopane), slides, prints, documentation of the monuments. A big part of the materials concerns Lemkovyna and Podhale. The collection includes also photos and other documents by Olgierd Lotoczka and Franciszek Kruk – art historians, conservationists, distinguished for activities in aid for saving churches. F. Kruk, an afterwar Voidodeship Art Conservationist of the Rzeszów Voivodeship, the predecessor of J.Tur, was distinguished for saving among others the church in Grab and Żydowskie. O. Lotoczka dealt also with recording of monuments in the contemporaneous Rzeszów Voivodeship, he was  the initiator of, among others, establishment of a permanent sepulchral exhibition of Lemko masonry at the church-neighbouring cemetery in Kotań.

The collection from Jerzu Tur and Barbara Tondos was handed over to Ruska Bursa in order to make detailed stocktaking, digitalization, conservation and then, sharing the materials in various forms to the interested people. Establishment of documentary and research studio is planned for the future. It would cover the thematic area of the South-Eastern Poland with a particular emphasis on the regions where Lemkos live.