Lemko mode in the “Ethno-climates” competition 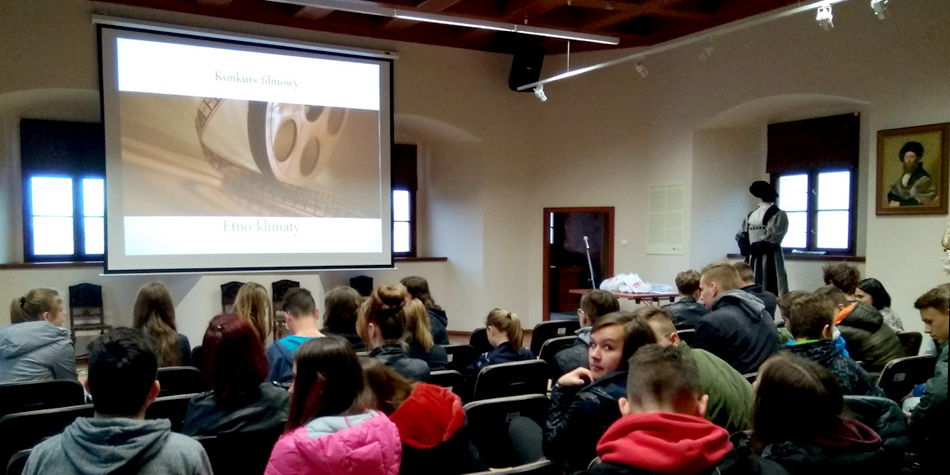 On 11 April 2017 in the Kasztel in Szymbark the announcement of the competition entitled Ethno-climates took place. The aim of the competition was to register a short film on the Lemko or Pogórze winter customs and traditions, the participants could be students of high and middle schools.

We announced the competition spontanically, in quite a difficult time as autumn-winter season, thus it was not easy to record the films. When we organize it again, and we will for sure, it will be in a better time, more hospitable when it comes to the weather, but also to show other themes  – according to Leszek Brzozowski, the director of the Skansen of Pogórze Village that is an affiliate of the Karwacjany and Gladysz Family Manors Museum in Gorlice. The museum, together with the Maziarska Farm in Łosie were the organizers of the competition. Overall, 7 films were sent for the competition, each of them different and with a message, a lot of Lemko culture was shown, visibly it is very strongly rooted among the youth, it is visible, characteristic. Because it was around Christmas time, the young filmmakers chose themes related to celebrating Christmas. They composed the customs from the Western and Eastern church.

The audience that gathered in the Kasztel had the ocassion to see all the works. The films differed much – every group had some idea on the themes. Among the seven film ettudes, there were several performances, with actors play and plot, in the recordings many people were involved. There were films that could be rather called as a reportage or a documentary, there was also one etude that combined the characteristics of both the forms.

Committee composed of: Joanna Gołda – ethnologist from the Ethnographical Park in Nowy Sącz, Yvetta Walecka – editor in chief of the Gorlice TV RTVG and Leszek Brzozowski, decided to grant three main awards and one distinguishing.

The lead was granted to the film entitled Stone Bread prepared by students from the Zespół Szkół in Bystra, the 2 year of the high school and 6 year of primary school. The film says about respect for bread as the most important element in every house. In the folk tradition bread has always been the reflection of the highest values and it was present in any field of everyday life, starting with bread as the basis of nutrition, and using it as an element of customs, beliefs, presence in songs, legends – always with the symbolic meaning. Much of this was shown in the awarded film.

The second prize was granted to students from the
Miejski Zespół Szkół No 1 in Gorlice for film entitled Forgotten so much? Similarly as the previous one, the film also had its plot that was played by the actors. A young girl, for unknown reasons, gets from the present times to the past, to a country house. She tries to get to know something about the everydayness. Could a girl from Pogórze marry a Lemko man?

The third award was given to the students of the Zespół Szkół from Uście Ruskie, entitled Bad beginning of a good ending, it was wholly recorded in Lemko, the background was a Lemko farm in Gładyszów. This is a story of how an average family gets prepared to the Christmas Eve. The production, although quite dark when it comes to the technical aspects, shows many Lemko customs and traditions related to Christmas.

The ettude enitled In the window of tradition prepared by students of the Zespół Szkół in Ropica Polska got distinguished. The film had the best image, sounding and was mixed in an interesting way, but it was a professional’s work, because of that the committee decided to appreciate the work in this way.

There were three documentary-reportage films sent for the competition on Lemkos, their history, traditions related to farming, painting, Christmas: Traditon-identity-history, Lemko traditions in the Sękowa Commune and Lem.

In the jury there were also ethnographists present. We took into consideration that it was youth and they did not have to know all the details, but we paid attention that there were possibly few faults, as for example in one film there was a mistake as to Pogórze and Lemko clothes, we granted less points. But not to mention such meritorical mistakes, we wanted to show the spontaneous nature of films, in what interesting way by playing and interesting scenario the youth could show different traditions. Where we could see that there were many people involved and they had to prepare earlier, we granted the biggest number of points – explained Brzozowski.