LemOn, Serencza, Orkiestra Św. Mikołaja… who else will perform at this year’s Gorlice Days?

The Gorlice Culture Centre together with the Town Office of Gorlice, as in the past, also this year, are preparing many attractive concerts for the inhabitants, everything within the Dni Gorlic 2017 (Gorlice Day). This is a unique festival of the town during which all the Gorlice inhabitants should have fun. Various ensembles will perform at the Gorlice stage, it will be exactly at the turn of April and May this year.

Within the Dni Gorlic there will be a following edition of the 4 sides of the Carpathians festival when on the Gorlice market square folk music will sound. The two-day event will take place on 29 and 30 April 2017. The performers will be among others: Serencza, Orkiestra Św. Mikołaja, Trebunie Tutki, Kapela Hanki Wójciak, Kzikopa, Wołosi and Dogadana. This diversity of ensembles enables to hear not only multilinguistic compositions, but also, apart from folk music, other musical styles. Let’s have a look on the details of the artists.

Serencza is a Lemko ensemble founded in 1997 by Roman Korbicz, Piotr Kwoka and Mirosław Trochanowski. In their repertoire the Lemko music was changing through the years into more contemporary, although still acoustic folk. Their compositions enable a different look at folklore that allows to get to the contemporary listener, helps to promote Lemko culture.

Kapela Hanki Wójciak is a Kraków ensemble that performs music from the crossborder of folk, word-music and authorial songs. In their performances you can hear the influences of oriental and Celtic music, Polish folk motifs, broken rhythms and much vocal improvisation.

Trebunie Tutki is a mountain family that has been dealing with music from generations, they got through evolution from a folk band to ensemble, they concert at the biggest festivals in Europe, Asia and North America. Their music is being developed and enriched with new melodies, contemporary lyrics and avant-garde arrangements.

Kzikopa plays traditional music of the Higher Silesia, they enhance the natural beauty and get a big dose of energy out of it, as well as new sounds and rhythms. Combination of polka with electro and Cuban klave or Silesian walczyk and Balkan motifes and heavy-metal are strange for Kzikopa only on paper.

Wołosi, an ensemble that is above any classifications, they produced absolutely original musical style. By breaking traditional borders of playing the bowed instruments, they  create modern and attractive for the contemporary listener music that comes from Carpathian roots, but brings elements of jazz improvization, it is full of rock energy and emotional messages.

The concert will start on Saturday 29 April 2017 at 5PM. On this day the following artists will perform: Serencza, Orkiestra Św. Mikołaja, Kapela Hanki Wójciak and Trebunie Tutki. The other ensembles will perform from 6:30 on Sunday, 30 April.

But this is not the end of attractions that the Gorlice town has prepared for the inhabitants. Already on 2 May you will hear the, chosen by the inhabitants themselves, star of this year’s Dni Gorlic – LemOn ensemble. This is them who won the Facebook voting.

As we know, everybody likes something else, that is why this time the Gorlice town Office gave inhabitants the possibility to choose the ensemble. The voting took place via Facebook at the end of the previous year. The artists were chosen based on the suggestions of the Gorlice inhabitants and suggestions of the Youth Council of the Town. On 14 September 2016 we got to know that it is LemOn ensemble that we will be listening to at this year’s Dni Gorlic.

LemOn – as we can currently say – the ensemble of big stages, with Igor Herbut as the lead. Their ambitious music has gained many fans. They have been very successful but they are still going on, setting new goals. Their recent success is the newly-released (24 March 2017) fourth CD. Living In the big world on everyday basis, the vocalist does not forget about his roots. As Igor Herbut says, 40% of the new CD originated in Lemkovyna, the vocalist himself returns here often, mentions it – it is still of high importance to him.

The concert will take place on the Square and it begins at 8PM. This one, as well as the other concerts organized within the Gorlice Day, are free. 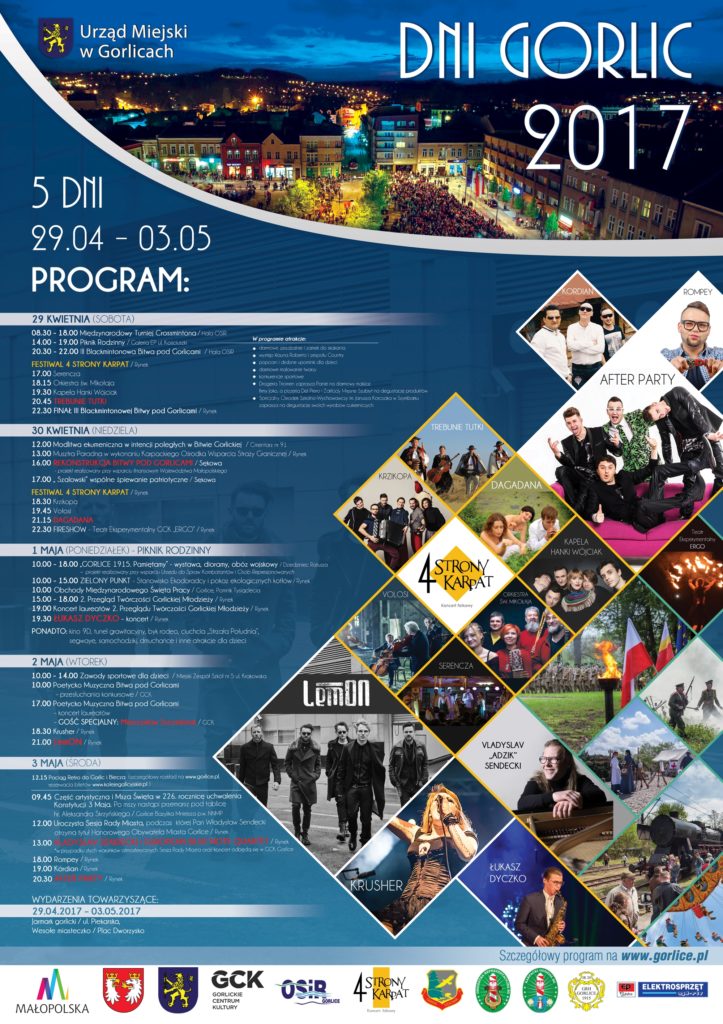