Sixth edition of the Multicultural Calendar for 2017 has been published. The publication which began in 2012 is referring by its graphic design and content to the pre-war Galician cemeteries.

The idea behind the publications is paying respect to culture and religious diversity. Thus, the calendar is composed of three calendars: New Style calendar, Julian calendar and Jewish calendar. Festivals were marked that are important for the particular religion or rite. The publication includes also among others archive photos and zodiacal calendar. Zodiacal predictions were taken from a publication of 1933 entitled “Astrological predictions of old calendaries and monthly proverbials,” and the list of names for a particular day comes from “Historical-tourist Calendar and Climate Guide for 1934.”

The first three editions of the calendar include descriptions of Catholic and Jewish festivals. The next two ones were dedicated to Galician towns, particularly to the people who lived in the places. In the sixth one – the current one  – the authors invite for a journey through popular resorts that were located in the southern voivodeships of the II Polish Republic – among others to Krynica, Iwonicz, Rymanów, Żegiestów. Rabka, Jaremcze, Truskawiec or Kosowo. The resorts competed with each other in the 1920s, as well as with the best resorts from the abroad, both when it comes to the climate and the curative properties of the mineral sources. The articles about the resorts were edited based on Tourist-Spring Guide, printed in 1934, as well as the Album of Polish Resorts, printed in Lviv, 1937.

The calendar, according to the idea of the publishers, is the symbol of the past era and the evidence for its multicultural character, ended in a cruel way by the II WW.

The calendar for the 2017 in paper version is available for purchase on kalendarz.izbapamieci.org.pl, it can be also acquired for free in the digital version. 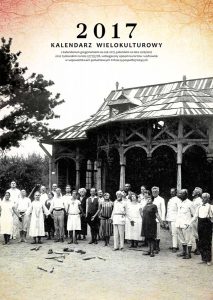 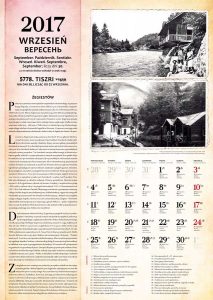 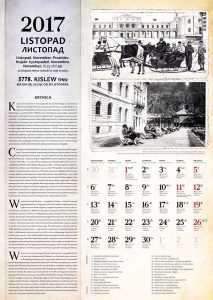