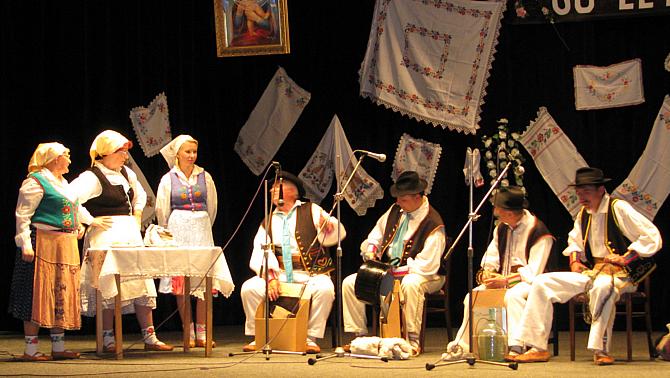 The ensemble of Czech Rusyns – Skeyushan – as every year invites for their festival. Already for 27th time they invite to Chomutov in the Czech Republic where Rusyns after the II WW were moved. This year’s celebrations of the founding anniversary will take place on 13 May, traditionally in the local theatre in Jirkov. The programme includes firstly welcoming of the guests  – local and from the broad – a short lecture on the history and achievements of the ensemble within the years of activity, further discussions and recollections that will come up at the event.

This year for the cultural part of the programme, again the Lemko Song and Dance Ensemble Kyczera from Legnica was invited; the last time they visited Chomutov in 2004. Apart from Lemkos in Poland at the stage the folk ensemble Kozaci Pokrova na Vltave Pragy, as well as the hosts – Skeyushan – will perform. As it was in the past years, finishing the cultural part of the programme, the organizers invite for a dancing zabava accompanied by the group of Mira Dupak.

The group is a typical Rusyn folk ensemble because the repertoire includes singing, music, dance and ritual part. The founders are Rusyns from Kamienka and Oribina villages. These Rusyns, in the middle of the XIXth century, settled in Skeyush village in Romania because of job, from there after the II WW, on a command of the president of the Czechoslovak Republic, they had to move to the western Czech lands – mainly to Chomutov. Members of the group until today care about the Rusyn language, traditions and songs. The Skeyushan ensemble was many times awarded, among others it was a laureate of the International Folk Festival Strazhnice.