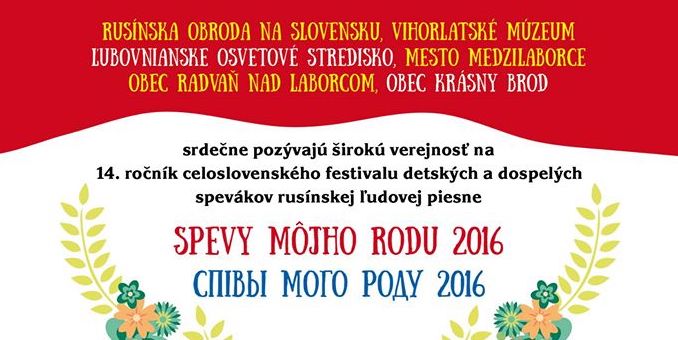 From 2-4 December 2016, the 14th Slovakia-wide festival of Rusyn folk songs will take place in the Presovian Rus’.  It is entitled: Spivy moho rodu. The event is directed to both children and adults, this year they will have the opportunity to perform in the Laborec region.

The event, main organizer of which is the Rusyn Obroda in Slovakia, will take place on Friday (2.12) and Sunday (4.12). The programme was planned in such a way that Friday is dedicated to childen’s performances and Sunday – adults’. On 2 December, the first concert starts at 9AM in the cinema room of the Medzilaborce Culture Center. On this day, at 12PM, young vocalists will move for the main concert to Radwan, located by the Laborec river. Sunday afternoon with the festival for adults starts at 1PM with a concert in the Culture Center in Krasny Brod. Then, the main concert concluding the event will take place, again, in Medzilaborce (starts at 5PM).

The annual festival is one of the most popular cultural-social events organized by the Rusyn Obroda. It is an event which – apart from presentation of the folk Rusyn songs – also gives the possibility to present authorial compositions. A competition is organized within the festival – its aim is to award the best vocalists, both in the category for children and for adults. The competition is addressed mainly to folk musicians who are members of folk ensembles. In this way, always some folk groups takes part in the competition and they accompany the performers, emphasizing that it is a competition of live songs. Every year, the competition results in discovering new talented performers of Rusyn music culture, mainly among children who always take part in the event numerously. Each edition of the event is organized in a different place, in Rusyn towns and villages.

The entrance for the event is free. It is realized with the support of the authorities of the Slovak Republic within the Culture of National Minorities 2016 programme. 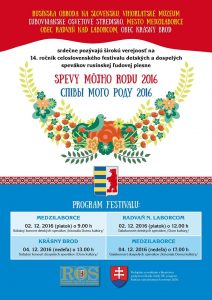