Tickets for this year’s Rusyn Festival in Svidnik already available 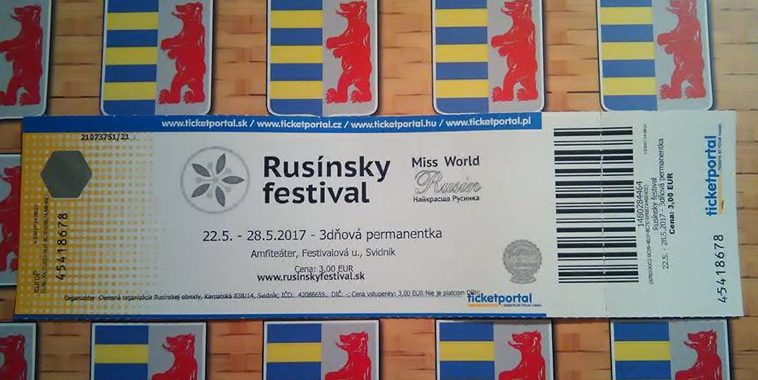 From the beginning of March 2017 you can buy tickets for this year’s festival of Rusyn culture in Svidnik – the VI Rusyn Festival. The information was given by the organizers on the official Facebook fanpage of the festival.

As last year, the price of the tickets is cheaper in the pre-order and as for today it is only 3 euro. You have to hurry up as already in April the price will rise to 6 euro and in May it will be 9 euro. Just to remind, the price includes full three hours of the main programme. The tickets ae available on www.ticketportal.sk and the details (among others on the discounts for children) are available on the website of the Festival.

This year’s sixth edition of the Rusyn Festival in Svidnik will take place from 22-28 May. It is a whole-week event that, apart fom stage performances, organizes also various other initiatives for Rusyns and amateurs of Rusyn culture, as for example initiatives dedicated to the Rusyn language, history and literature. The diversified programme of the festival annually attracts more and more participants and the main organizer (The Local Organization of the Rusyn Obroda in Svidnik) cares with each following edition that the programme be interesting and suitable with the current trends. It is the only festival where the culture of Rusyns, presented in the Svidnik’s amphitheatre in the form of performances of folklore ensembles, music, song and dance groups, is always completed with other activities – theatre plays, film projections, exhibitions, commentaries – all of this gives a broad picture of the Rusyn high quality culture.

In the last six years, the Rusyn Festival in Svidnik gained the opinion of probably the biggest event of this kind in the Rusyn world. The uniqueness is visible in the fact that it is typical (as for nowadays) – there is grilled sausage and beer during which sometimes you take a look at the performances on the stage, also a big emphasis is placed on preparing other actions which raises the festival’s weight. It is also necessary to emphasize that the festival provides programme for all age categories, including the youth and children.

This year’s show that aims to draw the world’s attention to Rusyns even more is announcement of a new attraction. It will be a competition for the most beautiful Rusyn girl in the world – Miss World Rusyn which will take place on 25 May 2017. In the LEM.fm radio’s ether from time to time you can hear short jingles ordered by the organizers in our radio by which they broaden the promotion and rules for participation in the plebiscite.

Apart from other Rusyn and non-Rusyn media, also the LEM.fm Media Group, was again asked for media patronate of the event. We are glad to be doing it, providing you with all the information on the coming festival. 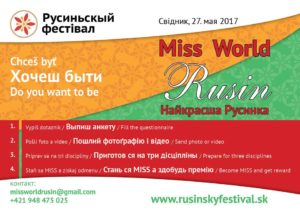