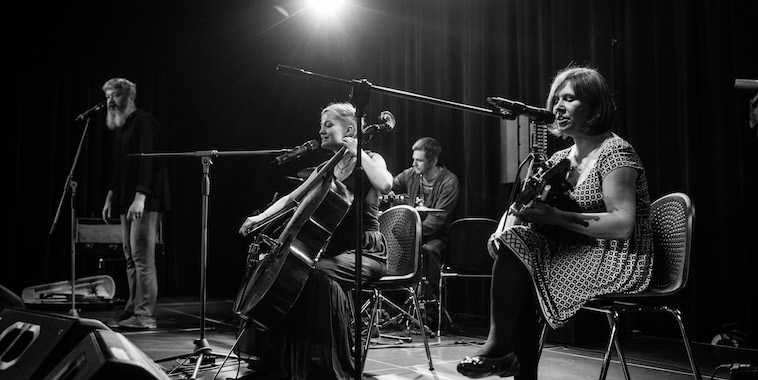 It is already the 26th edition of a festival known not only in the folk world. Today, i.e. 8 December in Lublin, the XXVI International Festival of Folk Music “Mikołajki Folkowe” starts with the opening of a photography exhibition entitled: “Tradition in a camera.” The festival traditionally takes place around St Nicolas day, but the name is also associated with the main organizers of the event – Orkiestra Św. Mikołaja known all over the world, who are the pioneers of folk music in our part of Europe.

“Mikołajki Folkowe” is a four-day event filled with plenty of referrences to the folk tradition, the root music, past habits reviving in the form of the events planned by the organizers. This year’s edition will include workshops, exhbitions, a scientific conference, as well as plenty of worldly folk music, the organizers’ passion for which evoked the idea to start the first folk meetings in Lublin over quarter of century ago.

An unchangeable point of the event is an “Open stage”, i.e. a part of the festival during which less known artists have the opportunity to present themselves. On Friday 9 December, twelve ensembles will compete for the lead, among them there will be also Lemko elements, as the example of A gdzie to dawniej stroiło group. The laureates, apart from prizes and the opportunity for a wider promotion of their works, will perform also at the Saturday concert when an official announcement of the results will take place.

In the previous years, both as participants and guests of the festival, Lemko ensembles (as well as other than Lemko, performing Lemko/Rusyn music) and soloists performed at the festival, among others: Chudoba, Cheremshyna, Kapela Romana Kumlika, Kapela Drewutnia, Widymo, Julia Doszna, Muzicka, Okmel or Serencza.

Lublin will remain the capital of traditional culture until Sunday 11 December when a concert of a Hungarian ensemble Besh o droM will end the XXVI Intrnational Festival of Folk Music “Folkowe Mikołajki.”

The whole programme of the festival is available on the official website of the organizers.
Photo above: А. Mulak/press materials