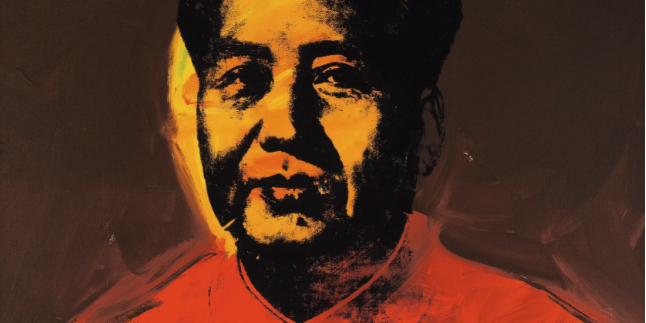 As we have already informed, at the beginning of April 2017 in London (in the Auction House Sotba) an auction of one of the pictures by Andy Warhol took place. According to the information given by the press agency Ruthenpress, the portrait was bought for 65,7 mln of Hong Kong dollars which is a new record when it comes to the sale of the western contemporary art in Asia.

In 1972 the president of the USA Richard Nixon visited the Chinese National Republic. This was the beginning for diplomate relations between the two counties. A year after the visit, Andy Warhol, after eight years of a break, started to work on a series of  portraits of Mao Zedong, a head of the Chinese state. One of them was sold for a recording amount of 11 dollars at the auction.

The portrait of Mao went to an anonymous collectioner from Asia. Before that it was being sent in London three years ago, the value increased by over 20% since then. Then it was being sold for 9.2 mln dollars.

Although at the beginning it may seem strange that Warhol occupied himself with potraying the communist leader, we can say it was the part of the artistic manifest of Andy – he wanted to show by this that you can question in a commercial, consumable way everything and everybody, even the lead of a communist country. Multiplication of potraits (a technique frequent for Warhol) was an additional roast of mass and reproduction led by the communist party.

The potrait of Mao is one of the series of 28 graphics and oil pictures with the image of Mao, made by Warhol in 1973. Warhol made it based on  the most popular image of Mao Zedong. All the reproductions show the upper half of the Chinese leader – from waist up, dressed in iconographic jacket with buttons. The photo was taken from the book Quotations of the Leader Mao called in the West as the Red booklet. Interestingly enough, the picture that hangs by the gate to the Forbidden City in Pekin was also painted based on the same photo.

Warhol’s Mao is the first one of the mentioned series of 28 potraits of the leader that was bought on the Chinese land. During the same auction, two other Maos were sold, but these were pictures by Chinese artists – Wang Guanti and Lee Bay.